The Wits mountain climbing club took on an epic challenge this weekend. 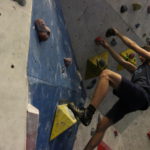 THE UNIVERSITY of Pretoria (UP) will host the annual Everest Challenge on Saturday, September 9 at the LC de Villiers Sports Campus.

The challenge was established in 2007 and consists of five teams. Each team is made up of 12 members or less.

This year, teams have 12 hours, rather than the traditional 24 to collectively wall climb the height of the 8 848 metre high Mount Everest.

The course is made up of five walls, ranging between 12 and 20 metres in height.

The distance climbed is measured in the number of laps that each team member does of a specific course with different levels of difficulty. The total distance climbed is then calculated at the end.
Benjamin McNally, one of the climbers and gear manager for the Wits Mountain Climbing Club, said that traditionally the stronger climbers will go first and tackle the more difficult routes.

“The toughest part of the event is when it gets to about midnight and everyone there feels tired and sore. Each person in the team tries to climb about 900 metres. By 02:30 in the morning, you get that second wind and just try push as hard as you can to finish as strong as possible,” said McNally.

At last year’s event, the Wits team finished the climb in just over 16 hours, placing them third out of the five teams that participated. “There are a lot of strong climbers that come through, but the atmosphere at the climb is very relaxed because the climbing community is very close knit and everybody really gets along well with each other,” said McNally.

The record for finishing the climb is 12 hours and 14 minutes. Since the time frame in which to complete the challenge has been halved, the winning team will now be determined by the total distance climbed by midnight.