Hockey ladies from the Southern Gauteng U/21 hockey are the new champions of the Inter-Provincial Tournament. 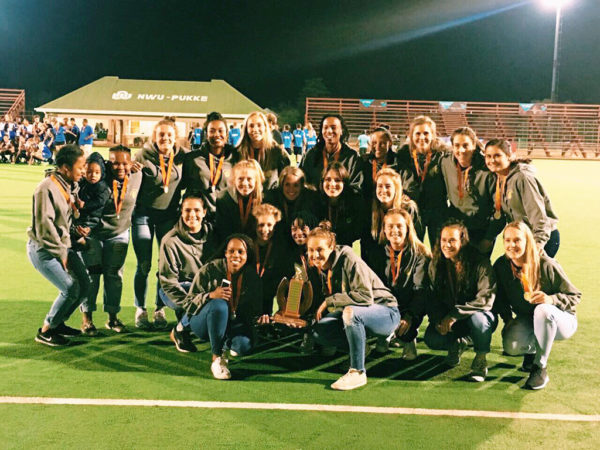 The Southern Gauteng Under 21 (U/21) ladies hockey team are the new champions of the Inter-Provincial Tournament. The team, which includes five Wits players, competed against
provincial teams for the prestige of becoming National champions on September 9.

The Inter-Provincial Tournament took place at North-West University in Potchefstroom where the Southern Gauteng (SG) U/21 ladies team won 2-0 against the Western Province Pens.

The players dominated the second half of the game where they scored the two goals.

Wits Vuvuzela spoke to the SG U/21 head coach and Wits ladies hockey second team coach, Tsoanelo Pholo, about her team’s win and what it means for the Wits hockey teams.

“Our win is owed to months of pre-tournament preparation from myself and my management team as well as an undying desire for excellence from the players,” said Pholo.

Pieterse spoke to Wits Vuvuzela about the win and what it meant to her.

“My body was covered in goose bumps when that final whistle blew. This literally meant the world to me as it helps to knock on possible opportunities and open more doors for those who would like to go further,” said the second-year Bachelor of Education student.

The Wits hockey sports officer, Erika Venter, said the SG win was not only significant for the five Wits players but for the ladies Wits team as a whole.

“The Wits ladies hockey team is setting their goals on winning the USSA Hockey 2018 tournament. And with five of our top Wits hockey players forming the core of the Southern Gauteng U/21 they have gained an enormous amount of experience by playing in the final, but more importantly by winning the final,” said Venter.

“We play for the best province in the country and being able to lead this team and work with the future stars of SA hockey is a privilege,” said Pholo.