Former acting Chief Operations Officer of the SABC, Hlaudi Motsoeneng failed to show up at the Save-a-Degree campaign hosted by South African Students Congress (SASCO) on Tuesday, October 4. The political organisation had to account for how it used funds collected during their campaign that has been going on since the start of the academic year.

Motsoeneng was meant to address students gathered in Leseding Block at the Institution’s Education campus, however, he failed to attend and no reason was given as to what led to his unavailability. He was meant to address the issue of the lack of housing and his commitment to providing an unspecified number of students with housing.

The talk went on as planned with SASCO Chairperson Smanga Nhlengethwa explaining what the Save-a-Degree campaign was about. 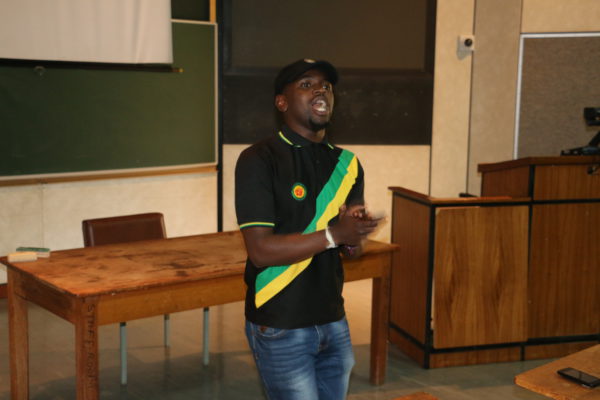 “This campaign saw us collecting donations all over campus in order to assist students who were sleeping in toilets, libraries and computer labs in the beginning of the academic year,” said Nhlengethwa.

The chairperson explained that the issue of accommodation is a nationwide problem and not a localised university predicament. “This is why we decided to support the Wits Economic Freedom Fighters Student Command’s (EFFSC) #AccommodationIsLand protest through formulating our own Save-a-Degree campaign.”

According to Nhlengethwa, their campaign has been able to assist a total of 23 students. These students have been supported through meals from the dining hall or transport money in particular for students in the school of education who have to do teacher training which requires them to go to a school across Gauteng for practical training.

“South Point, a student accommodation provider, also donated 20 rooms towards this cause. The rooms were left to the SRC to allocate towards deserving students as SACSO felt that if they took part in the allocation they may be accused of giving rooms to their affiliates”, said Nhlengethwa.

A majority of education students in attendance acknowledged the efforts made by SASCO and the Education School Council but also raised other concerns. Mpumelelo Jacobs, a final year student in the school of education said, “It is all too well that we have such meetings all the time before and after protests but what is concerning is the fact that there is never any feedback given to students after issues are taken up with the

Jacobs echoed concerns raised by other students for the change in the time allocated towards teacher training this year, instead of the usual two weeks, this year students had to do six weeks of teacher training. “This has meant that assignments have been cramped into a short space of time leading up to the coming final exams, a scenario that deeply disadvantages students,” said Jacobs.

Education School Council chairperson Vusi Mchunu, said issues raised on the day will be taken up with the school of education and “no student will be academically excluded because of this nonsense six week teacher training that has affected all leaners.”