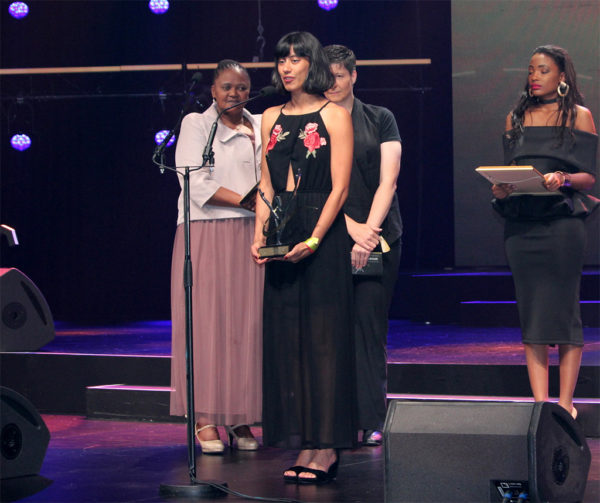 GAUTENG WINNER: Tanita Ramburuth-Hurt accepting her award for Sports Woman of the Year at the Gauteng Sports awards. Photo: Provided

Combrink told Wits Vuvuzela that she was “honoured and humbled” by the award.

“I wasn’t expecting to win, so I was initially shocked. When I came off the stage I was shaking,” said Ramburuth-Hurt.

“It really is a fantastic achievement for Tanita and Maria. We are glad that we had two amazing women winning awards on the biggest stage in Gauteng,” said Wits High Performance Club Senior Manager Michael Dick.

The criteria for the ladies’ awards were their sporting achievements on a provincial, national and international level, their improvement over the past year and their community service beyond participating.

Both of the ladies proved that they had thrived in community service.

Ramburuth-Hurt is the coordinator for the Gender Equity in Sport portfolio on the Wits Sports Council (WSC), which aims to support current sportswomen and encourage more women to get involved in sport. Combrink is on the panel for the Wits Disability Interest Group, which is involved in looking after the rights of people with disabilities at the university.

Wits Vuvuzela also spoke to the ladies about the importance of women to be honoured for their achievements in sport.

“I think sport is still mainly regarded as a male-dominated arena. It is very important for young girls to be part of sport, it teaches one many different values and lessons that you can apply in your day to day,” said Combrink.

Wits Sport had eight finalists nominated for the awards, the most from a single institution, four of whom came from the Tang Soo Do club.