The Wits food garden is getting a make-over with the help of engineering and art students. 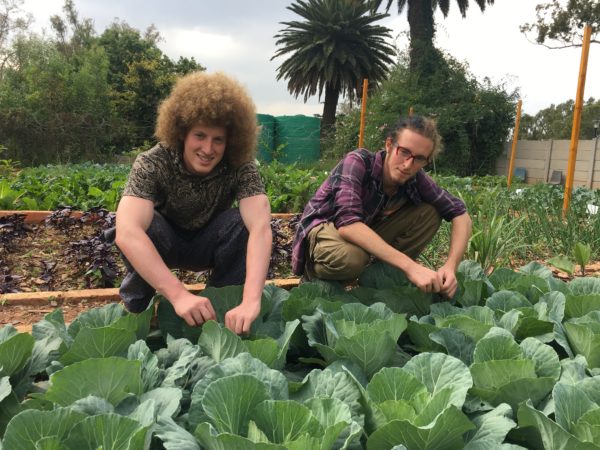 The Wits Citizenship and Community Outreach’s Food Bank (WCCOFB) are revamping their student-run garden together with Wits Engineers Without Boarders (EWB-Wits), the Wits Inala Forum and Organised Chaos Dimension 23 (OCD23).

“The current renovations are designed to improve the efficiency of the garden, really aiming at maximizing the productivity of the available land. The renovations, which have already been completed, have increased our output dramatically,” said Keelan.

Jezri said, “We’ve moved to a higher plant density design so that we can increase our harvest and provide more food for the WCCOFB to distribute to more students.”

Keelan added to Jezri’s comment, “Our primary mandate is to produce fresh produce on campus so that students can learn how to grow vegetables for themselves in the future.”

Renovations of the garden include levelling and sectioning the garden, by means of a brick grid, as well as amending the soil to increase its health and productivity.

Wooden poles have been installed as part of a plan to enclose the entire area in shade cloth for UV and frost protection. An irrigation system, which is managed by EWB-Wits member, is also underway.

“EWB chose to get involved with Inala because we believe we have a similar vision and mission. So, a collaboration with them will be beneficial to [EWB-Wits] members and the community at large,” said Eunice Bohulu, chairperson of EWB-Wits and chemical engineering student.

Keelan explained that the Inala mandate, “Is to ensure that all students have access to nutritious and ethically grown food, as well as education on how to grow their own food and feed their communities.”

“The produce from the garden is distributed through the WCCOFB to students in need,” said Keelan.

The walls in the garden are in the process of being painted by OCD23 art students and volunteers.

Mzoxolo X Mayongo and Anthropology student and the head of OCD23. He explained, “OCD23 is a Wits artist studio/movement that works to initiate change through artistic endeavours.”

Mayongo told the Wits Vuvuzela, “Art is a key agent in creating awareness and working with the food garden has allowed for a synergy to take place at Wits.”

He added that the project would not have been possible without the efforts of participating artists, saying, “It’s about a collective effort, [artists] are giving their skills and time to a project for social good.”

The plan is for the garden to be completed by June 2018.