This past Saturday, April 21, was the first time Wits played host to a women’s sevens tournament at its Braamfontein main campus.

The competition, held under the umbrella of University Sports South Africa (USSA), attracted 15 teams, and was held with the goal of attracting female students to play rugby at Wits.

Michael Dick, the high performance club senior manager for Wits Sport, told Wits Vuvuzela, “The tournament was extremely successful. With 15 teams participating, it is the biggest women’s rugby tournament in South Africa. We hosted hoping it would increase the awareness of women’s rugby on campus.” 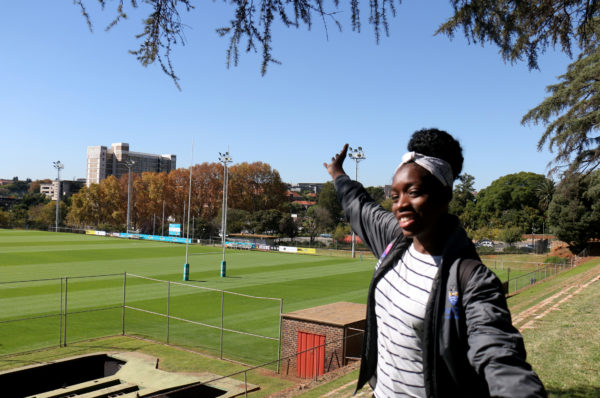 Rugby sports officer at Wits Sport, Amigo Ngcakana, said Wits rugby is in the process of setting up a women’s  rugby team which they hope to implement in the second semester. “We want to see a bigger representation of women in sports, specifically in rugby,” added Ngcakana.

“I got here three years ago. I feel that the rugby club is now at a stage where it can start marketing itself and I can start focusing on other things. The next stage is to implement women’s rugby. Hopefully in a couple of years we’ll have rugby bursaries for women to come to Wits,” he said.

Dicks added, “If the numbers are right we hope to have a 7s team entered into the USSA event in 2019.”

First-year computer science student, Charmaine Lukalanga, has been pushing for a women’s rugby team to be formed at Wits since the beginning of the year.

Lukalanga feels that a women’s rugby team will be a good addition to Wits. “At times I feel as though I’m the only female demanding female rugby but then I remember how being in high school I knew many people who wanted to come to Wits but not purely for academics, they also wanted to come through for the sports. Wits is lacking these sports.”

Lukalanga added that her experience of the tournament this past weekend was “amazing”. “We have great coaches and with all the resources we have, we can do great things with a female team. So we’re definitely ready for a female team.”