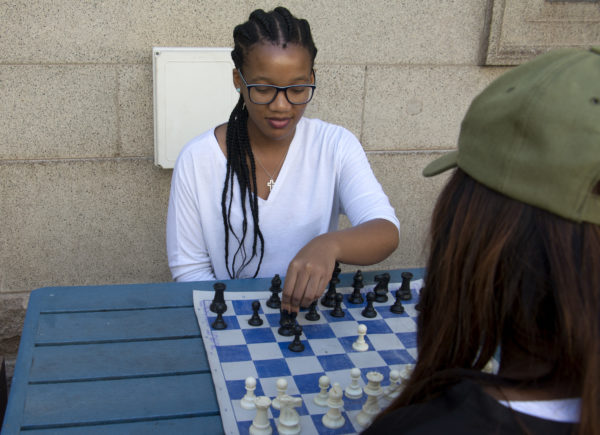 WINNER: Tshepang Tlale showing off her skills on the chess board.      Photo: Londell Ramalepe

The annual competition brings together previous World Chess Federation champions and this year’s gathering will host competitors from a number of African countries.

Tlale, third-year BA student, has been playing chess since she was three years old. “It is my sister who taught me how to play. She, too, learned to play chess at the age of three and was taught by our mother, who played chess when she was still in school,” said Tlale.

In 2011 she became the youngest South African to earn the title of Woman International Master (WIM). According to the World Chess Federation (FIDE), WIM is the second highest title awarded to female chess players. “I became the youngest black South African female to earn the title of Woman International Master (WIM), which was truly an honour given that I was only 13 years old at the time”, said Tlale. She added that “Out of all junior women chess players in Africa, I was the number one, which is precisely how I earned the WIM title.” The title also gave Tlale automatic entrance into the African Individual Chess Championship this year.

Tlale’s coach, Vincent Choko, has mentored her for more than a decade. He told Wits Vuvuzela that, “Because of her busy schedule with school, we meet once a month on Saturdays and practice for 12 hours so that she is well prepared for the upcoming tournament.”

Choko said that Tlale’s personality when playing chess is very different than her actual personality. “Although this is not in her true nature, she is a very aggressive player on the board and also tends to be decisive and positional,” Choko added.

The coach is very confident that Tlale is going to come out victorious in the Zambiam tournament. “She is a clear winner. She was number four in the 2011 Mozambique tournament, and now that she is older, she has more focus and will definitely win,” Choko concluded.

Before going to Zambia for the competition which runs May 11-24,  Tlale needs to raise R30 000 for her travel and board. For information about the donation, you can email tlalechess@gmail.com.