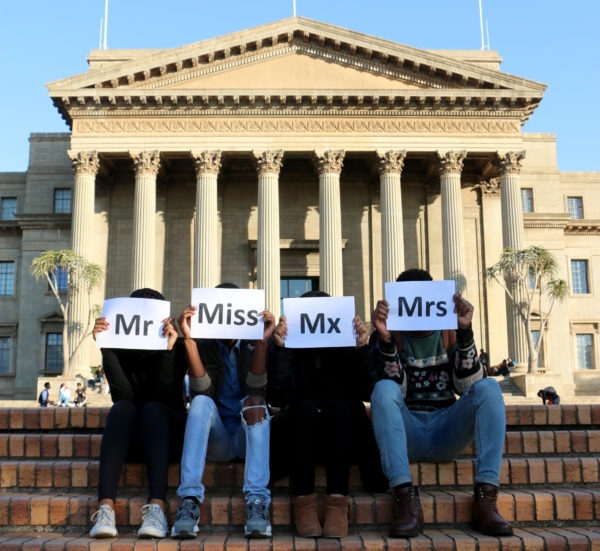 MX’ING IT UP: Wits becomes more inclusive with 43 gender neutral bathrooms and the introduction of the Mx title. Photo: Sam Lee Hill.

WITS HAS added the gender neutral title Mx (pronounced mix) as an option on the student self-service portal since Monday 16 July. This was implemented in order to become more inclusive of the Lesbian, Gay, Bisexual, Transgender Intersex, Asexual and Queer plus (LGBTIAQ+) community. Students and staff will now be able to select whichever title (Miss, Mr, etc.) they prefer with the added option of the gender neutral title.

This choice will be reflected in communication from Wits and its internal facilities. An official statement from the Transformation Office states that the decision by the university, “… affirms those who are transgender, non-binary or gender non-conforming within the University community, who wish to hold a title that affirms their identity.”

Non-confoming people do not often utilise the pronouns given to them at birth such as he or she. Senior administrative assistant at the Disability Rights Unit, Tish Lumosprefers the pronouns they/them. They* were the driving force behind the inclusion. They have benefited from the addition as they have been using the Mx title after coming out as a transgender, non-binary person since 2015.

Lumos believes that some people do not have the privilege to identify freely. They said, “Existing title options such as Mr, Mrs and Ms all have assumptions. The assumption is that a title is a static entity, and this limitation creates a site of violence where people don’t find these titles affirming with their identity.”

According to Lumos, including the Mx title was a necessary addition to become more inclusive. Lumos told Wits Vuvuzela, “A number of requests have come through over the past few years. It is argued that 4% of our population is transgender, and that is a significant size group to affect the change.”

“A number of requests have come through over the past few years. “Development planning master’s student Siya Hlongwa is a transgender woman. To her, this change means she can be herself and feel respected during her studies.

Hlongwa told Wits Vuvuzela, “As a Wits University student I see great importance in the university ensuring all students feel welcome and create a space for each student no matter who they are, where they come from and how they wish to be addressed.”

This change will not reflect on legally binding documents which are required to use a person’s legal gender marker. In 2016, Wits began its efforts to become more inclusive of the LGBTIAQ+ community by introducing gender
neutral toilets. There are 43 gender neutral toilets available across the campuses with plans to include more.