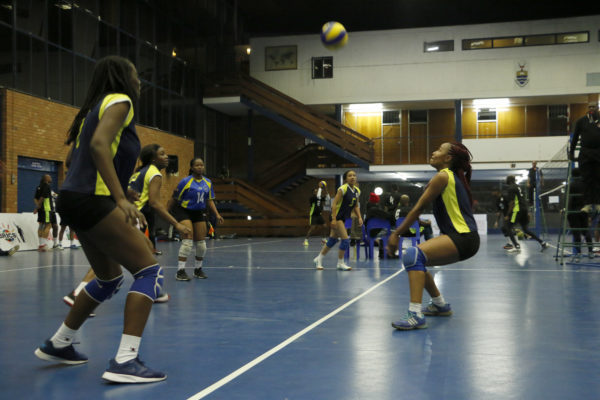 The University of Johannesburg women’s volleyball team beat 3-0 in the first derby of the semester at Old Mutual Sports Hall on Thursday, July 26.  The match was part of the Johannesburg Volleyball Union league.

The two teams started off strong with Wits serving well, and backing that up with producing effective blocks to keep UJ at bay. However, after losing the first ten points UJ began to find their rhythm by using their more experienced players.

Wits were able to string a few tactical set pieces together but battled to keep their performance consistent. They were able to retrieve four straight points in the second set before UJ called an emergency team talk to break their rhythm.

Lenah Fatah, the Wits assistant coach said, “We need to improve our passing; it needs to be better. This will then allow everything else to fall into place.”

She added, “The team needs more aggression when playing, which will help them with blocking and scoring which is where we need to improve.”

The final set saw Wits attempt a rescue mission of the game. They lead the game 18-16 but were unable to capitalise on the lead and a few handling errors caused them to lose momentum.

Wits woman’s player, Stacey Nheera, said that Wits lacked the spirit to come back and win the game once they fell behind. “We need to build on our spirit, we dropped our heads and we couldn’t get it back,” she said.

The team hasn’t been able to practice effectively as Wits hosted the BRICS games last week. Nheera added, “We are doing well especially from where we were at the beginning of the year. There is definitely an improvement.”

Mtha Ndlovu, a UJ supporter was confident that UJ would win the match from the start. He said, “UJ will take it, they are looking very strong. The coach made good changes in the first set.”