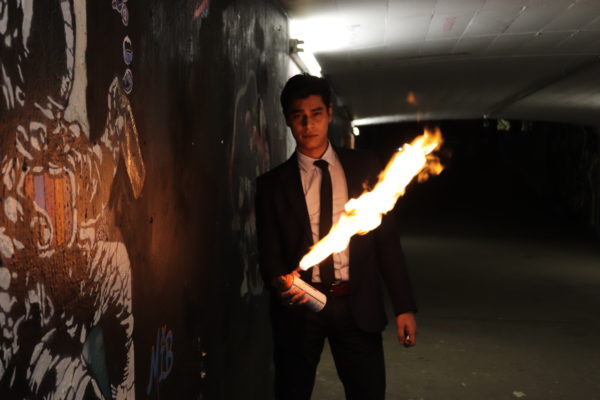 YOU MIGHT not know his face, but if you have walked through the graffiti tunnel recently, you would have seen MiB’s artwork.

While in his third year of studying to become a chartered accountant, Muhammed Ismail Bulbulia, otherwise known as MiB, found Banksy’s (the forefather of stencil street art) documentary ‘Exit through the gift shop’. Street art offered him excitement and a creative outlet that his studies couldn’t. This became a turning point in his life and he tried his hand at creating street art.

Becoming a street artist did not stop MiB from pursuing a career in accounting. He found a balance between art and accountancy. Talking about his studies, MiB believes that he found a love for accounting after he stopped being influenced by others. “I’m glad I went [and] experienced it though, as it made me realise that defining yourself by how others view your choices leads to a life that’s never truly your own.”

The 23-year-old’s artworks have appeared, and disappeared, around campus since 2015. When he started out, MiB’s art had a political focus and rebellious message. MiB’s artwork portrays powerful messages which have allowed some of his pieces to go viral.

His most recent contribution to Wits walls can still be seen in the West Campus tunnel. Showing an astronaut blowing bubbles into space, it was inspired by MiB’s love of space. He tries to create an empty vastness on a flat space like the deep black of space but with an unexpected twist. His art is where surrealism and realism meet in perfect harmony.

His advice to anyone wanting to try their hand at street art is to: (1) pick up a spray can, and (2) don’t get caught.

This Wits alumnus may have graduated last year but MiB has left his mark on Wits, in multiple ways. “I think one of the keystones of being human is wanting to leave your mark behind, whether it’s slathered on a wall or meticulously mapped out in a masterpiece.”

This cool kid regularly visits Wits to make campus a little cooler with his art.