The Wits Tang Soo Do club has returned to South Africa from the World Championships in London with a total of 31 medals, including 14 gold. The team of nine members participated in the competition which took place on August 4 and 5.

“The competition was fierce,” said Daniel Chen, second-year mechanical engineering student, who won three gold medals and a bronze. Chen is a newcomer to the Wits club and London was his first international competition.

Second-year computer sciences student, Jichandre Sambo, was overjoyed with his haul of two gold and two silver medals, one in each of the four categories in which he participated. “It was amazing. Going there I had the mentality of making friends and colleagues proud,” Sambo said.

“We ended up with two world champs in the black belt division,” said Wits coach, Master Gregory Hart, who says he could not have asked for more from his students.

Hart told Wits Vuvuzela that the team has been working really hard for the past year and their hard work has paid off.

Makgabo Mohopo, a second-year BSc biomedical science student who won four medals, said the team worked together very well. Mohopo told Wits Vuvuzela, “I loved the way everyone stuck together as a team. We even had a yoga session together. It didn’t matter which dojang [club] you came from, we all supported each other.”

Ngwato Kekana, a Wits architecture alumnus, was participating for the second and final time in the world championship as part of the Wits club. Kekana won medals in all three categories he participated in. “They are practicing really hard, they don’t hold back – it’s really inspiring,” he said, speaking about his competition at the championships.

Mathematics honours student, Kim Lucas, also assists with training at the club where he’s been a member for the past six years. According to Lucas, “The Wits club upheld the high standard and dominated in every single category.”

Refilwe Gomba, an honours actuarial science student, won four medals. This is his fifth year doing Tang Soo Do at Wits. He offers the following advice to anyone new to the sport: “A lot of people worry about getting hurt in martial arts. Take a leap of faith, try it out and see how it goes.”

The South African 55-member team, including participants and instructors, won a total of 113 medals at the championships which attracted 700 competitors. 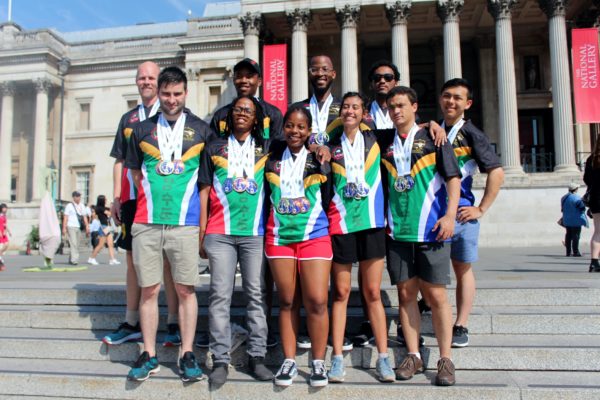