A group of students are trying to solve the problem of loading Kudu Bucks onto student cards. 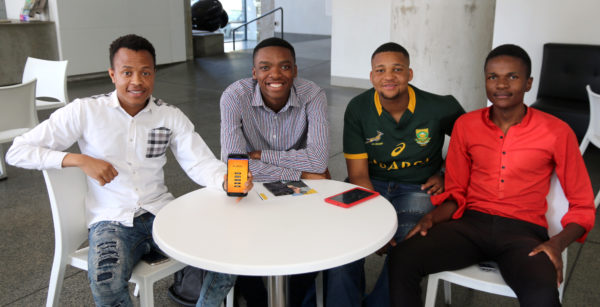 A group of Wits students are in the process of getting their mobile application for Kudu Bucks approved, after proposing the idea to Wits University management at the beginning of September.

Kgati Sibuthuma, Lethabo Mathekga, Simbarashe Mhlanga and Tshegofatso Aphane are the four students behind the development of the app, Kuduo, which they have been developing since March. The app which has gone through four prototypes so far aims to make it easier for Wits students to load money, or Kudu Bucks, onto their student cards for payments and purchases at the university.

Currently, Kudu Bucks can only be loaded onto student cards via designated terminals on the campus which are sometimes out of order. Sibuthuma, who is a second-year BCom law student, said, “The app is going to solve delays in printing as it instantly allows one to load Kudu Bucks onto their student card without leaving a venue.”

The team explained that if one does not have a smart phone to use the app they can use a friend’s phone. Mhlanga said, “All you need to log in is your student number and existing Wits portal password… It is all about convenience.”

Kuduo further requires one to link their account to their bank in order to purchase Kudu Bucks. Sibuthuma said that having a bank account shouldn’t be a problem for Wits students as most students need a bank account to have National Student Financial Aid Scheme (NSFAS) funding, for example.

The Dean of students, Jerome September told Wits Vuvuzela that the“purpose of the app is to improve the Kudu Bucks system”. September added that the team has been given extensive feedback to work on after they proposed the idea. “We will plan a further engagement with the students, and will then consider the possibilities of a partnership,” September said

Lwazi Maseko, a third-year BA media studies and political sciences student, is an avid user of Kudu Bucks. She says the idea of an app such as this one would be ideal for students at Wits.

“An app would be better as sometimes you have to print an assignment and then the Kudu Bucks machine is not working and you have to use Jetline and it is more expensive and an inconvenience as it is always full,” said the 21-year-old.