‘’Papa was a rolling stone’’ is how Mozambican journalist Estacio Valoi describes Pastor Roy Perkins, a man who has been accused of the abuse of young girls in Maforga’s Mission Orphanage in Chimoio over a period of 30 years.

Valoi, who broke the story for Zam Magazine, recounted the details of his investigation at the African Investigative Journalism Conference (AIJC) in Johannesburg on Monday, October 29.

Valoi said Perkins, who was born in Australia but raised in Zimbabwe, was known to the local community as a man of God who could never never do any wrong. The pastor was respected in the community because of the work he did in helping the poor. But, as Valoi’s story showed, Perkins was a wolf in sheep’s clothing.

Valoi explained that his investigation showed that Perkins slept with the under-aged girls in his care at the orphanage with many of them falling pregnant. The girls were often forced to abort their pregnancies.  ‘’It has become a norm in our society that women and children are abused, and the perpetrators get away with it. I was going to fight for them, no matter what,’’ Valoi said. 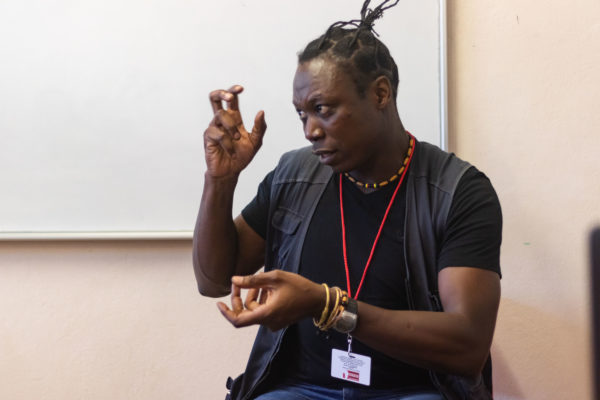 An emotional Estacio Valoi describes the experiences of child abuse and harassment uncovered during his 3-year investigation into Pastor Roy. Photo: Lerato Mokhethi

Valoi discovered that Perkins supplied the girls with things that they could not afford themselves, which made them dependent on them. In instances where girls attempted to escape from the orphanage, Perkins had hired private security to watch over them.

Valoi said he was unable to report Perkins to the police as the pastor had close relationships with the authorities.  “If he was reported to the NGOs, they kept referring the case to someone else.” As a result of Valoi’s report, Perkins is under investigation for his alleged crimes and the young girls are receiving counselling.