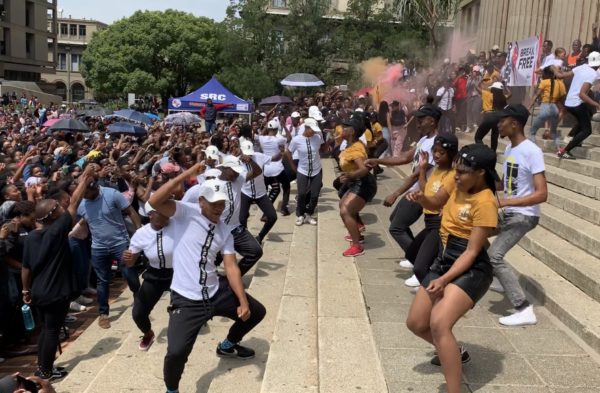 A surprise flash mob of 20 dancers thrilled the audience in the front of the Great Hall on Monday, February 11, as Global Dance Festival Week kicked off at Wits University.

The festival which runs until February 15 aims to “create dialogue between dance and its sustainability”, according to Kwanale Finch Thusi, one of the organisers.

“We want to break free from the norm and stereotypes such as, ‘you are too big to dance,’ ‘one can never make a sustainable living through dance,’ and ‘black people should only work for someone else and not themselves,'” Thusi added.

Thusi directed the flash mob and the festival’s other activities together with Ashley Morley, the production manager of Global Dance Week in South Africa.

Drama for Life alumnus, Jerome Johnson, who was one of the dancers, told Wits Vuvuzela that, “There is a lot of stigma against people that have chosen dance as a career, that It is not taken seriously enough, or that it is not seen as something that can generate an income.”

“For me … this (Dance Festival Week) is putting a spotlight on people that have been in the industry or even young and up-and-coming dancers that want to enter in this field to know how to make their career as a dancer sustainable.”

Gugu Dhlamini, a Wits Performing Arts alumnus who also participated in the flash mob, told Wits Vuvuzela that “Instead of just holding back and people suffering, not saying anything … we need to break free. We need to be more vocal about our opinions and what we feel needs to happen, the changes that need to happen.”

South Africa is joined by Ghana, America, France and Sweden in observing the Global Dance Festival Week by showcasing dances popular in each of these countries.