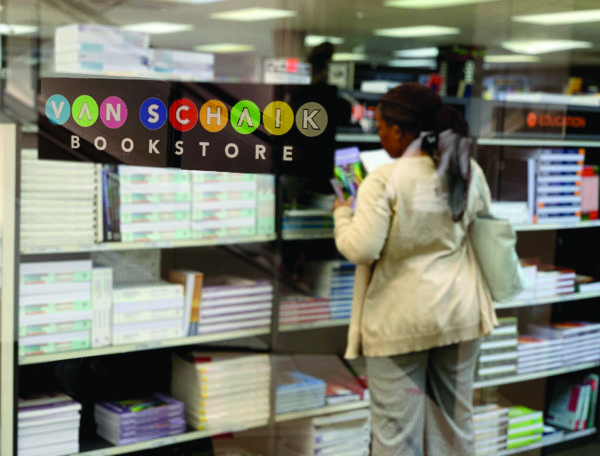 A man was caught stealing textbooks at the Braamfontein Centre Van Schaik bookstore on Friday, March 8 and it has since emerged that he had stolen textbooks worth more than R90 000, since December 2018.

Van Schaik branch manager Joseph Khumalo said the unnamed man walked into the store on Friday morning and pretended to be a regular customer browsing the shelves for books.

The thief was caught on CCTV hiding six A5 textbooks around his body under an oversized cream white jacket.

“When he approached the door to pick up his bag, the siren went off. This was surprising because he had not bought anything and it looked like there was nothing on him.

“The security guard called him over so he could be searched,” said Khumalo.

The guard, Tondani Nemaname, searched the suspect and found he had hidden the books against his lower back and at his waist.

“After the siren went off I asked to search him. He refused and tried to go back into the store. I then called for back-up and we discovered he had hidden six textbooks,” said Nemaname.

“We took the books from him and he was locked upstairs for about four hours until he was taken to Hillbrow Police Station,” Nemaname said.

According to documents seen by Wits Vuvuzela, the man had tried to steal two finance textbooks worth R1 817.90 and four accounting textbooks with a value of R1 890.00, for a total value of R3 707.90.

Other textbooks that had gone missing from the store since December were identified in a photo on the suspect’s phone. They were valued at a total of
R90 009.95.

At the beginning of the year staff members realised books were disappearing.

“In January already, when we were looking for some of the books, we realised the system said we had stock, but on the shelves there was nothing.

“We could see something was happening, so we started tagging the most popular books, which led to the suspect being caught,” Khumalo said.

A spokesperson for Hillbrow Police Station confirmed that a suspect was arrested on Friday.

“The charges he faces are shoplifting, after he was indeed found in possession of six textbooks. He appeared in the Hillbrow Magistrate’s Court on Monday,” said Sergeant Mduduzi Zondo.