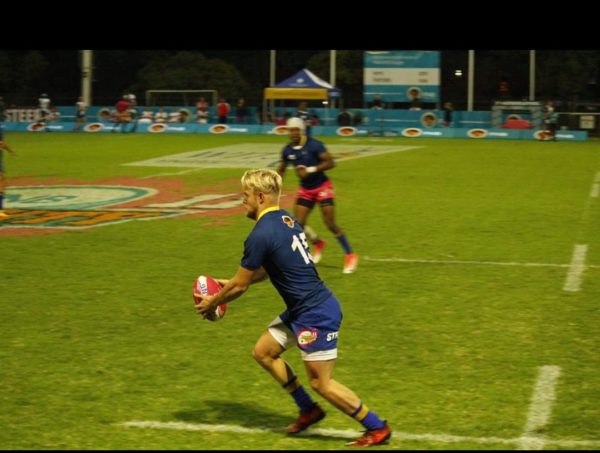 Tyrone Green in the number 15 jersey for FNB Wits in 2018. Photo: Martina Chabant

Tyrone Green, FNB Wits Varsity Cup and SA Under-20 star made his Super Rugby debut for the Lions against the Melbourne Rebels on Saturday, March 16.

The 20-year-old played a prominent role in the Lion’s nail-biting 36-33 win over the previously unbeaten Rebels team. Green started the game at fullback before moving to the left wing, where his perfectly weighted grubber kick set up a try, pivoting his team into a winning position.

Green tallied up an impressive 13 runs, beating 9 defenders and gaining 85m for his team. This landed him a spot on the Vodacom Super Rugby team of the week.

Green played in his first match for the FNB Wits team back in 2017. But “2018 was his breakout year” said FNB Wits manager, Ferdinand Kelly.

“Green is an extremely talented and versatile player with an understanding of the game that surpasses many. He has the talent and the x-factor to be playing rugby at the highest possible level someday.

“Obviously his talent got him where he is today, but I think that Wits and the Varsity Cup was a great platform for him to showcase his talent. He meant a lot to us as a team and to the university as a whole”, Kelly added.

“One of the best things about Tyrone is that he is always excited to get the ball in order to make others on the team look good. He would make gaps for those around him and we obviously succeeded because of it” Said Gregory Champion, a former FNB Wits teammate of Green.

Kelly told Wits Vuvuzela that “off the field [Green] is very humble and is someone that is true to his word”.

This was reiterated by another former FNB Wits teammate, Taine Chabant, who said, “Even though he had been in the Lions set up for a while. He never let it get to his head. He was always very humble.”

Chabant further told Wits Vuvuzela that Green is, “A very quiet individual. He kept to himself and wasn’t the biggest personality in the team. Although he always trained hard and did what he had to do.”

He further added that it was evident from their first match together against FNB Maties, that Green “has a never say die attitude”. “He’s not the biggest guy, but-my-word he is a handful! He certainly is a rugby ‘prodigy’ and a force to be reckoned with.”

After an impressive debut, Green will once again be wearing the number 15 jersey for the Lions in their match against the Sunwolves in Singapore on Saturday, March 23.