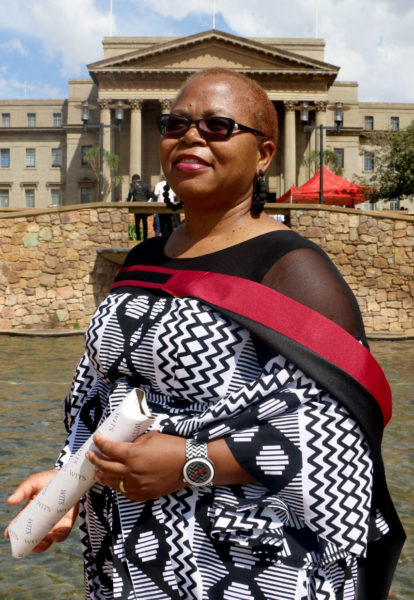 As soon as Jackie Mondi stepped onto the stage to receive a Bachelor of Education degree on Tuesday, March 26, the entire Great Hall erupted into chants of “Mama J!”, as the audience and academics gave her a standing ovation.

That’s because Mondi was no ordinary graduand. The 49-year-old had achieved straight A’s throughout the four-year degree – 24 in total.

Julie Donnelly, programme admin manager at the School of Education, told Wits Vuvuzela that Mondi was the only mature student to have achieved such grades in her group.

To the other Education Campus students, Mondi was more like a parent, according to Vincent Mchunu, who had been in the same class as her. “She shared strategies and study skills with regards to coursework; hence we would call her Mama J”.

Dipela Jacoline Mondi, who was born and raised in Soweto, studied for a Diploma in Accountancy at Wits Technikon after matric. However, she was not passionate about accounting.

“I did that because it was the only thing available. I got a bursary and it was better than sitting at home. What I’ve always wanted to do was to become a teacher, but no one around me knew how to help me apply,” she said.

Mondi enrolled for the BEd programme in 2015 at the age of 45, “to acquire as much knowledge in teaching as possible”.

Realising her dreams did not come without sacrifice for the Mondi family. Having decided to study full time, the family had to survive solely on her husband’s income. Her husband had to bear with the many late night calls Mondi received from her classmates whom she often helped with their studies.

“My son, who was in Grade 9 when I started in 2015, was in boarding school in KwaZulu-Natal. My husband ended up going to see him more often than I could,” said the mother of one.

Those sacrifices paid off with her stunning academic achievement, and she felt as if she was walking on air on that Great Hall stage with the deafening cheers from fellow graduates.

And the cherry on top? She got to be robed by her husband, Lumkile Mondi, a senior lecturer at the Wits School of Economic and Business Sciences.

Mondi is currently studying for an honours in Education. She says having seen the challenges young learners in Soweto primary schools face when transitioning to English as the medium of instruction after being taught in indigenous languages up until Grade 4, she plans to open a reading and writing centre in the near future.