FOUR Wits students have created a library-style app to help their peers learn about human genetics. 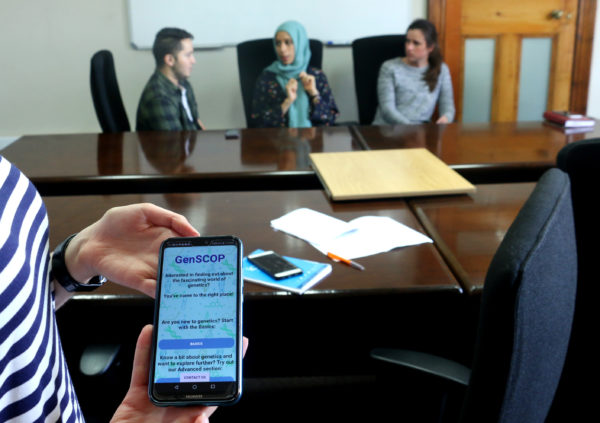 Director of SBIMB Professor Michèle Ramsay said, “The SBIMB students in collaboration with students from the Division of Human Genetics came up with this idea on their own and drove it to fruition.”

SCOP was initially formed as a way for Wits students to interact and work with their community.

The idea developed through teaching more schools about genetics because “kids are really interested … especially when it comes to bringing out real-life examples, their heritage,” said Smyth.

Hayat said, “We realised this because we do a little bit of outreach … and through that we were able to realise that people are interested in genetics, but not everyone understands what it is.”

GenSCOP was formed as an extension of SCOP to extend their reach to more students without the use of extensive resources.

“We decided that an app is great because mobile phones are everywhere,” said Da Rocha, who came up with the idea to turn their presentations into an app.

Smyth added that “making it a mobile app makes it more relatable to the generation below us”, due to the growing interest of schools in using information technology for teaching and learning.

The app, even though it was created for high school students, can also be used by first-year university students to “wrap their minds around the basics of molecular biology”, said Da Rocha.

Once downloaded, the app does not need data to function.

“We are looking at how to translate it into different languages – our South African languages,” said Hayat.

The team are also considering extending their reach to countries outside of South Africa, such as translating the app into French and Arabic, and adding more matric syllabus work for teaching purposes.

“This app has the potential to have wider impact across Africa, as the students market GenSCOP at the various conferences and research meetings that they attend nationally and internationally. They have received positive feedback,” said Ramsay.

The app was officially launched in Kigali, Rwanda at the African Society for Human Genetics Conference on September 21, 2018.