Of the 26 million registered voters, 700 000 were first time voters, including some students standing in queues at the Wits Old Mutual Sports Hall on Wednesday, May 8.

According to the Independent Electoral Commission (IEC), just under 200,000 registered voters are between the ages of 18 and 19. 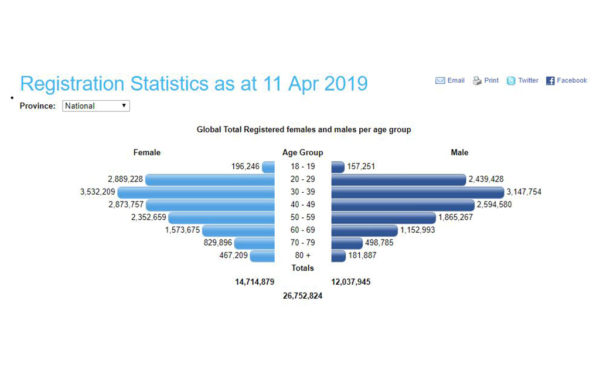 Wits Vuvuzela spoke to a few of Wits students to gauge their feelings and experience of voting for the first time.

Third year BSc student Nkosinathi Nxumalo, 20, said that his experience was not as daunting as he anticipated. “Election staff explained everything quite well,” he said.

He added that it was challenging to decide on who and which party to vote for since he knew the two major rival parties so well. “Deciding which evil to go with was hard,” Nxumalo added.

Twenty-year-old, Masego Rampa, who is a second year BSc Property Studies, who came out of the voting station looking thrilled said she knew what she was voting for and that the experience “was amazing”.

“I was very excited to vote for my party,” Rampa said.

Lisa Mntungwa, a third year oral hygiene student said, “it was very liberal to exercise the right to vote”. She added that first time voters should neither be pressured by the crowd nor family members on who to vote for.

“I know the importance of not letting other people decide for you then complain about decisions that are being made while you did not take part in decision making,” said Dimpho Majoe, second year Bachelor of Accounting Science student.

Majoe added that, if the process could be less human involved, “it would be better knowing no one is tempering with the results”.

Second year bachelor of education student, Ruth Modise, 20, said it hit her that she is now an adult and has to be a responsible citizen. “Picking a party was challenging because candidates give you a persona that conflicts with the stories of corruption the society speaks of,” she said.

MA Architecture student and second time voter, Lichumile Monakali, 26, said he was excited when he voted for the first time in 2014 but found himself more conflicted in deciding on who to vote for in 2019. “Now I am more matured. I listen to both sides with an open mind,” he said.

He further said that the IEC should put strict restrictions to “prevent political parties and websites from approaching voters on the day of voting.”

Biyela said that many first time voters “seem to have a preconceived idea as to how this process should work out and that affects their attitude towards the process.”

FEATURED IMAGE: Voters in a queue waiting to cast their votes at the Wits Old Mutual Sports Hall on Wednesday, May 8. Picture: Rose Shayo.