Four Wits students were part of the Ultimate Frisbee team that represented South Africa in the 2019 World under-24 Ultimate Championships (WFDF) in Heidelberg, Germany earlier this month. 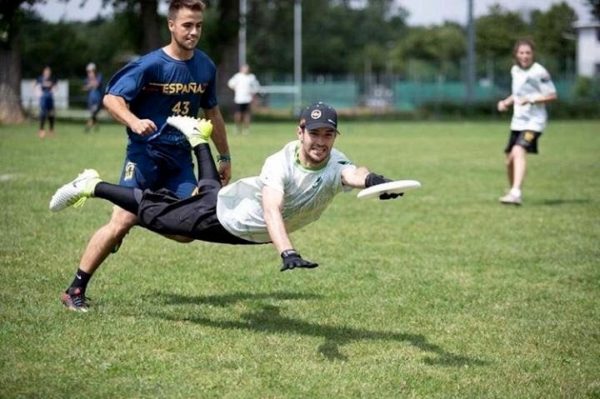 Ariel Goldberg lying out in a game against Spain. Photo: Provided

The team were awarded the spirit cup by their peers for fair play during the tournament which was not officially refereed.

“Our chemistry was not great at the start of the tournament because we hadn’t really had the chance to play together”, said Wits architecture student Rebecca Potterton. The players were dispersed throughout the country and were only able to play once together before Germany.

Another of the Witsies in the team, Merete Goosen, BSc in biological science, said her favourite memory of the tournament is when the team bounced back from 11 – 14 to win their game against Italy 15 – 14.

“It was great to see how developed Frisbee is in other countries,” said Goosen.

Justus Immelman, Gauteng regional coach, praised his players for winning the spirit cup, and said it speaks to the kind of people they are.

“I expected them to place better than they did but then again, South Africa has a very isolated Frisbee community, so our players are not exposed to as many different strategies,” he added.

South Africa was the only African country to participate in this year’s WFDF, an international tournament that takes place every two years. Initially, the team was seeded last of 21 countries but their performance improved their world ranking to 18.