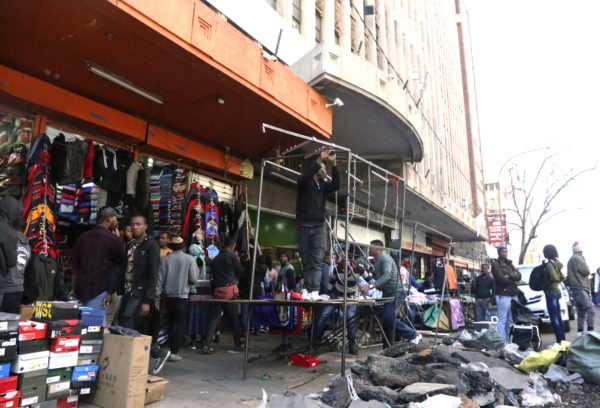 There are conflicting accounts about the street battles that were raging between foreign shop owners and cops in the Johannesburg CBD on Thursday, August 1.

The South African Police Service (SAPS) said they were raiding the shops in order to find counterfeit goods and to stop illegal trading.

However, the shop owners and street sellers said they were fighting back to stop the police – whom they accuse of corruption – from stealing their stock and money.

“A group of people claiming to be representatives of brand holders like Nike, Adidas, and others came with the South African Police Service and proceeded with violence, shooting us with rubber bullets, teargassing us and throwing bombs (stun grenades),” Tadesse Yeniane Berhei, a 34-year-old Ethiopian shop owner on Rahima Moosa (formerly Jeppe) Street told Wits Vuvuzela.

He said their shops are raided on multiple occasions by people who are guarded by the police, but who never produce any legal documentation to justify their actions.

“They attack us to make us run away so they can take our things without running inventory and they always jump to the tills first,” he alleged.

SAPS spokesperson captain Kay Makhubele told Wits Vuvuzela, “We take the goods, but if there is money believed to be made from the illegal goods then we have to take the money in.

“We do inventory for all the things we take and we record them in the SAP13 book,” he said.

City of Johannesburg MMC for public safety, councillor Yao-Heng Michael Sun, told Wits Vuvuzela that the raids were an SAPS operation and the Johannesburg Metro Police Department had been called in as backup.

“[The shop owners] must understand that it is not necessary for the police to arrive with a search warrant at a place suspected of crime or illegal activity.”

A shop owner who asked to remain anonymous alleged that he was shot seven times by the police with live ammunition during a raid on June 9.

“I was passing by when they started fighting and a white man wearing police uniform shot me on my leg. He shot me again in my abdomen when I was already down and he continued to shoot at me.

“I had two operations to get the bullets removed from my body at Charlotte Maxeke Academic Hospital. The police steal our stuff to resell it. That is why they don’t have documents,” he said.

Makhubele denied that police had shot live ammunition and encouraged those that claim to have been shot during the raids to lay an official complaint.

However, with a medical report from an optometrist at Charlotte Maxeke Academic Hospital Hospital in hand, Haile Getachew (30), told Wits Vuvuzela, “They shot me with a rubber bullet on my eye and now I can’t see. They didn’t ask us anything they just started shooting.”

A street vendor, 60-year-old Joseph Mkumbo, told Wits Vuvuzela that the items they sell are not from South Africa but are imported in containers. “[The police] are letting [the goods] inside the country, then they want to come fight here.”

Captain Makhubele said the SAPS did not know where the counterfeit goods came from nor how they came into the country, but they conduct raids on a regular basis when they suspect illegal trading.