The home team got off to a shaky start in the first set as the Spiker-Roo ladies asserted their dominance within the first minute with a perfect spike putting the visitors on the scoreboard.

The Titans efforts to pick up the pace and close the gap were futile as they lost the set 25-20.

The tables were turned in the second set as the Titans sought to redeem themselves. They hammered the opposition 25-10 effortlessly  and capitalised on their rival’s errors. 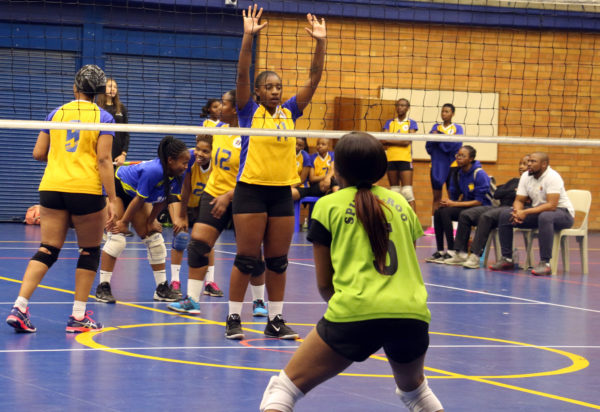 For a brief moment in the third set, Spiker-Roo dominated the court. A powerful spike by Wits player Lungile Ngwenya levelled the playing field 2-2.

The teams remained neck and neck for most of the set but a sloppy bump from Spiker-Roo player Courtney Masterson broke the deadlock. This tilted the score to 18-17 in the Titans’ favour and catapulted the team to their ultimate 25-20 win in the set.

Spiker-Roo’s attacking errors crept into the fourth set of the game as they lagged behind the Titans. The Titans occasionally assisted the opposition to score through unnecessary errors such as Dineo Skosana’s serve which went straight into the net.

The fourth set scrore of 25-8 sealed the victory for the home side.

Wits player Nhlanhla Mlambo said she was happy with the result. “We started off slowly but we worked harder with each set to claim the win,” she said.

“I had to keep being vocal watching them play to remind them what they came for,” said Wits volleyball ladies coach Zweli Ngwenya.

He added that the Titan’s loss in the first set was largely due to the use of upcoming players players.

Spiker-Roo coach Kevin Fat said his team went into the game with “many nerves” resulting in them making common mistakes.

“The players need to realise that volleyball is point oriented not time oriented,” Fat said.