Drama teacher’s practices include storytelling and play therapy where game-play is used to uncover and work through issues.

Eight pupils begin marching in their individual free-form paths as they are told to let out their aggravations. At first a hush is heard in the room before the youngsters simultaneously begin talking aloud to themselves revealing what has been bothering them within the past week. The tempo gets faster, the pupils march harder and eventually loud shouting fills the empty theatre room of Michael Mount Waldorf School where Welma de Beer is doing a warm-up exercise with her matric class.

De Beer is a drama teacher and therapist who is actively involved in reducing the negative effect trauma has on children’s education. The initiatives, Emergency Pedagogy and Baratang, are the driving vehicles she uses to spread her therapy to those in need. Apart from teaching part-time the Waldorf matric class, she is a lecturer and counsellor at Drama for Life and this year has begun a PhD at Wits to further her knowledge on trauma in education.

It was never De Beer’s initial plan to get involved with trauma counselling. Her journey started during her teaching years when she came to realise that school children were struggling to do well in academics because they showed symptoms of trauma. 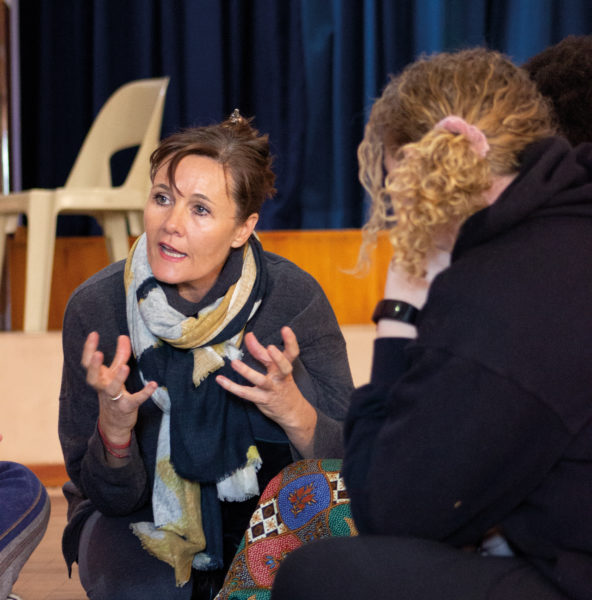 “We think they’re naughty, they’re not listening, they’re lazy”, says de Beer. “Shouting and screaming at them is what triggers and traumatises them more.”

At a Waldorf workshop she discovered Emergency Pedagogy, a German initiative that goes into disaster-struck areas in order to help traumatised children through simple games and new teaching methods.  De Beer noticed that this NGO provided a phenomenal opportunity for drama to be a useful tool in healing people without re-traumatising them.

After attending some workshops in 2017, De Beer became one of the few founding members of the South African branch of Emergency Pedagogy. Thus far, they have assisted traumatised children following the Hermanus fires, cyclone Idai in Zimbabwe as well as in South African townships where they try and equip teachers to deal with trauma.

De Beer describes how every day she is confronted by a poster at Wits that reads ‘Sorry I am too weak to do anything’.

“If we all feel too weak and it’s too big, what’s going to happen if none of us at least care enough to try and risk it?” asks the drama therapist.

This year she took a leap and with the help of two colleagues, Nozipho Khumalo and Bandile Seleme, created her own NGO, Baratang. The organisation aims to address South Africa’s low educational outcomes by addressing trauma’s effect on children’s cognition.

“If you want to be the change that you desire to see in the world, you need to be able to sit in the fire with people and that is the one thing I admire about Welma,” says Seleme, who studied at Wits around the same time as De Beer.

Khumalo, who met De Beer at the Waldorf school told Wits Vuvuzela, “She is a people’s person and a humanitarian at heart.”

Whilst she enjoys the teachings of psychiatrist and psychoanalyst Carl Jung, on a practical level De Beer believes in a mixed approach. She uses practices including storytelling, embodied improvisation which involves bringing one’s own experience and personality into a character as well as play therapy where game-play is used to uncover and work through issues.

“Drama therapy is always using metaphors and symbols,” she says. “[The children] don’t have to tell you the whole story, but they have a chance to put it into perspective through a metaphorical story.”

To those who are sceptical of drama therapy, De Beer responds that people should give it a try first.

Before her focus on therapy, De Beer was a full-time teacher at Waldorf, but now only sets aside time twice a week to teach the matric class.

A former pupil, Andrea Nicolaou, says that the younger pupils couldn’t wait to get to high school so they could have De Beer as a teacher. “She just has the ability to spark the passion she has into everyone else.” 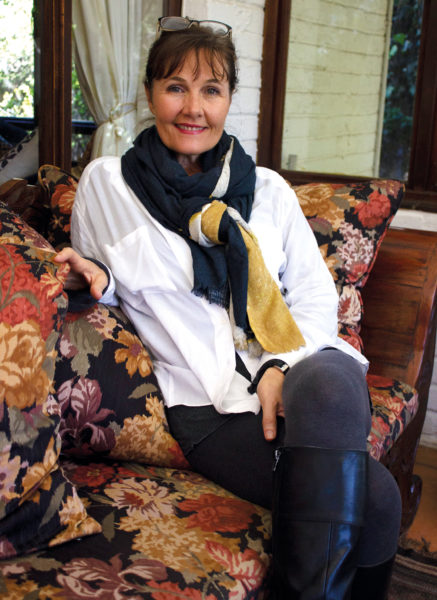 LIFE OUTSIDE OF THERAPY

Whilst this year’s focus has been drama therapy, De Beer finds time to do yoga nearly every second day and she also looks after three beehives at a plot in Bloubosrand, a suburb northwest of Johannesburg. She says she was inspired to begin beekeeping through her love of organic gardening and the way in which ecological systems work.

“My mother has had to reinvent herself a number of times in her life. Professionally, intellectually and personally. I admire how she has successfully engaged with these and in doing so inspired herself and those around her,” says De Beer’s 26-year-old daughter, Magdalena.

While the theatre room of Michael Mount Waldorf School is full of theatrical expression, De Beer’s home comes to life through mystical paintings on the walls and oriental ladies who live on scatter pillows. Her garden is well kept, and the sun brightly illuminates her outdoor lounge which is filled with floral-patterned couches contrasting the oriental rugs on the floor. From workplace to home, De Beer is surrounded by the world of arts.