‘Nothing to see here’, owner and residents shoo away the media.

There are conflicting reports about the causes of the fire that gutted the historic Grand Station Hotel in Jeppestown on August 2.

Rumours quickly circulated on social media that the fire was a result of arson. However, the Emergency Medical Services (EMS) and the Jeppestown Police have discounted that the fire could have been started deliberately. But they can’t agree either on how the fire started.

To add more fuel to the controversy, residents of the building and Jeppestown community members are not willing to talk about the fire to journalists. 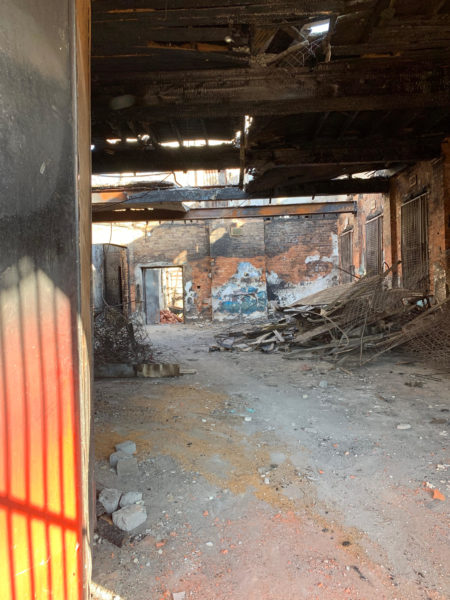 Inside the Grand Station Hotel which was gutted by fire.      Photo: Anathi Madubela

“In the room that we traced the fire to, we have found that the resident disconnected the element from the stove and was using it as a heater. Because this was not deliberate we cannot say it’s arson,” EMS spokesperson Nana Radebe told Wits Vuvuzela.

Captain Richard Munyai, spokesperson for the Jeppestown Police Station, told Wits Vuvuzela that the cause of the fire was a kettle of boiling water that had been left unattended. All the water in the kettle evaporated causing the kettle’s element to catch fire and spread to the rest of the building.

Munyai also said there was no evidence of foul play and that police had not opened any criminal cases regarding the incident, and no arrests had been made.

The Grand Station Hotel was built in 1896 and was protected under the National Heritage Resources Act.

According to the Johannesburg Heritage Foundation (JHF) website, “Its name said it all, the Grand Station Hotel. It was a hotel that considered itself ‘grand’ and it was close to a station. It was a substantial hotel – the 1896  plan showed 27 bedrooms and a ladies sitting room.”

However, by the time it burned down, it had long stopped operating as a hotel. The JHF website reports: “In 2014 the Grand Station Hotel was placed on auction and received a top bid of R3 million. The vendor roll (2014) describes the hotel as follows: ‘Today the building with a gross building area of 1,075m² on a 1,487m² erf is fully let, including five shops on the ground floor, 38 residential rooms, 13 of which have en suite facilities’.”

When Wits Vuvuzela arrived at the scene, most of the two-story building was just a burnt shell, with the upper floor seemingly beyond repair. Some shops had survived the fire and were still in operation.

The owner of the building was on the site but he seemed to have a hostile disposition towards the media, and questioning our motives.

“You can see that we’re trying to clean up this place, I do not have time for this. Come some other time. What is it that you are even trying to find? There was a fire, nothing to see here,” said the man, who refused to give his full name, saying he is known as Hassan or simply ‘boss’.

Wits Vuvuzela spoke to some of the small shop owners but they also refused to divulge information about that fateful night. A woman who was braiding hair at the salon said, “No one was here during the night of the fire. We know nothing.”

Another man, who overheard the discussion, said, “You journalists have been coming here since the fire. There is no scoop. You are wasting your time.”

Kathy Munro, chairperson of the Johannesburg Heritage Foundation said that the foundation did not receive the news of fire well. “The foundation was very shocked and dismayed at the destruction by fire of this landmark heritage building.

“You have to understand that the building was not owned by the City of Johannesburg. It has had several private owners over the years and we do not know who currently holds the title deed, so there is not much we can do,” she said.

Munro, who is also an honorary associate professor in the School of Architecture and Planning at Wits, said she had no knowledge of how the fire started. “Unfortunately, often people who live in a single room sometimes cook on gas or primus stoves and there is an increased fire risk. It is something that needs to be managed by the owner who lets out the rooms,” she said.

FEATURED IMAGE: The historic Grand Station Hotel in Jeppestown, is in ruins after a devastating fire. Photo: Anathi Madubela