The motives for targeting the place of worship are unclear but the patterns of violence follow the same vein of xenophobic attacks in the area.

A mosque was petrol-bombed in Hillbrow on Sunday, September 8 during the ongoing spate of xenophobic attacks on foreign nationals in and around the inner city of Johannesburg.

The entrance of the Masjid Himayatul Islam, a mosque on Nugget Street, was set alight by a petrol bomb thrown by one of two suspects. The crime allegedly happened when the two suspects approached a man outside the mosque and tried to search his pockets.

“One of the guys took a bottle that contained something like petrol, then took a match, lit the bottle and threw it into the mosque,” said Kassam Muhomed, a priest at the mosque.

Worshippers inside the mosque heard the impact of the petrol bomb which started the fire and rushed to extinguish the flames. The two suspects were arrested when they attempted to flee the scene and were taken to Johannesburg Central Police Station by officers of the South African Police Service.

Scene outside the mosque in Nugget Street Johannesburg. A petrol bomb was hurled earlier near the front gate. Two suspects were arrested. #JoburgCBD @visiontactical pic.twitter.com/uNZJJ65lD3 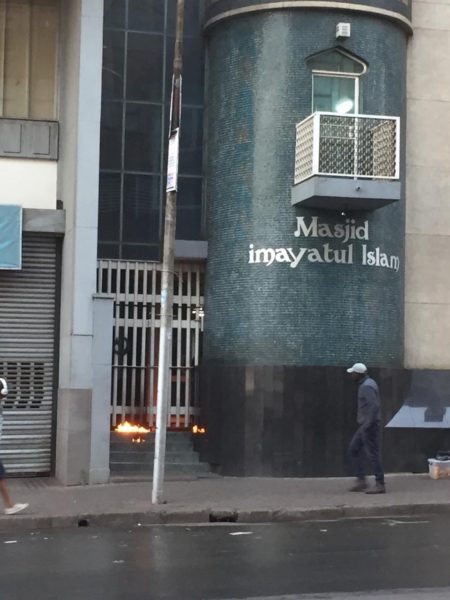 Xenophobic attacks erupted in violence on Sunday, September 8, starting with protests in Jeppestown and ending in Malvern, Johannesburg. Photo: Provided

Muhomed told Wits Vuvuzela he did not know whether the attack was motivated by the prevalent xenophobic violence that peaked on the Sunday.

Professor Loren B Landau from the African Centre for Migration and Society at Wits University said there was not one single cause of xenophobia,

“While we can argue that this [the xenophobia] is just criminality – and it is criminal – or that it is rooted in economic deprivation… that cannot explain the violence,” he said.

“There are particular reasons why foreign nationals and citizens labelled as outsiders are being targeted… all rooted in short-term political or economic gain… xenophobic violence is not about unemployment and inequality. The violence is political.”

Landau told Wits Vuvuzela that attacking a place of worship is a symbolic manifestation of the xenophobic violence, which aims to cause further division between different nationalities and ethnicities.

“[Xenophobia] is conducted to rid particular neighbourhoods of unwanted outsiders while sending a message to government and others about who is running the place,” Landau added.

“Attacking a religious institution is a particularly powerful way of sending a message.”

“We will forgive them. It is only ill-advised people who are doing this [because] they are motivated by ignorance,” said a worshipper at the mosque who asked to remain anonymous.