Technology is evolving at a rapid pace and disrupting various aspects of our lives.

Ready or not, the new internet is here and while this connectivity provides internet users with invaluable information, it can also be detrimental. This was a key message delivered by internet pioneer Professor Robert Metcalfe at the 68th Bernard Price Memorial Lecture on Monday, September 16 at Wits University’s Great Hall.

Metcalfe is an American engineer and entrepreneur as well as a professor of innovation and entrepreneurship at the University of Texas. In 1973, he co-invented the ethernet with fellow American David Boogs. An ethernet is an interconnection of computers which forms the backbone of the Internet. 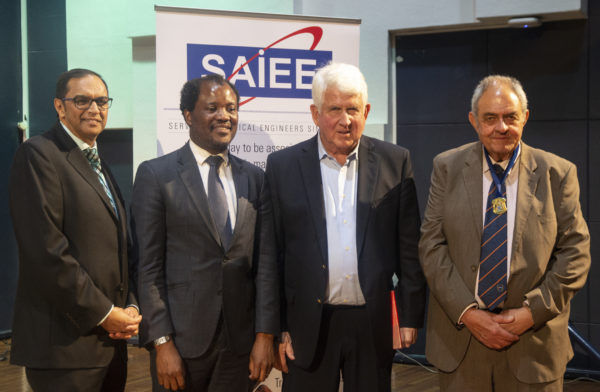 The inaugural lecture is organised by the South African Institute of Electrical Engineers and is hosted in different cities with the main event being at Wits University. From left to right: Professor Sunil Maharaj, Professor Zeblon Vilakazi, Professor Robert Metcalfe and George Debbo. Photo: Ntombi Mkandhla

“The internet suddenly came upon us in 50 years, delivering connectivity that we did not fully understand how to deal with,” Metcalfe told the audience at Wits.

According to German online statistics portal Statista, there are over four billion people connected to the internet.

“We are not done with connectivity, we are not even half way,” Metcalfe said, adding that the gigabit internet that has a speed of 1000 megabits per second will allow more information to be easily and quickly accessible to internet users.

This will expose even more users to what Metcalfe described as “pathologies”, consequences of receiving or sending unfiltered information. These include pornography, hate speech and addiction to social media.

Metcalfe said he was addicted to using Twitter. “I used Twitter for ten years, I tweeted 35 000 times, I had 25 000 followers…and I stopped using it and went cold turkey,” the 73-year-old said, adding that he would use Twitter for over three hours each day.

“I am using [disruption] in the positive sense rather than in the pejorative sense,” Metcalfe said.

Metcalfe said education is giving way to internet learning and that educators need to shift away from the brick and mortar teaching model, “We have begun offering degrees where the students don’t even have to show up on campus,” he said.

“Look at health; there is the possibility of remote surgery in real time without the psychical presence of a doctor in a theatre,” the 23-year-old said.

FEATURED IMAGE: Professor Robert Metcalfe shares his thoughts on how the internet is propelling the future of living. Photo: Ntombi Mkandhla