Rethinking Black tax as more than a burden or Ubuntu

What if black tax is not as easy to define as conversations around its role suggest?

Black tax is the catchphrase of the post-apartheid ‘black experience’ used to describe a dynamic of financial exchanges between and within black families. As black South Africans navigate the dysfunction of a young democracy attempting to rebuild itself, Wits Vuvuzela asks whether black tax is a destructive or constructive force.

The financial exchange of black tax manifests itself in different ways: sending groceries to your parents, paying school for your siblings, or sending cash to your cousins or distant relatives. Some view this exchange as an inescapable obligation and others as a way of restoring dignity over generations of black families disenfranchised by the social, economic and political subjugation of apartheid.

“I don’t have a full time job, however I’m a musician and I have gigs every now and then [and] when I have money after a gig, I’ll give my dad R200 and he can see what he does with it for the house, whether he buys groceries or electricity,” said Lerato Khubeka, a second-year BCom accounting student at Wits University who lives with her younger sister and entrepreneur father who is not formally employed. 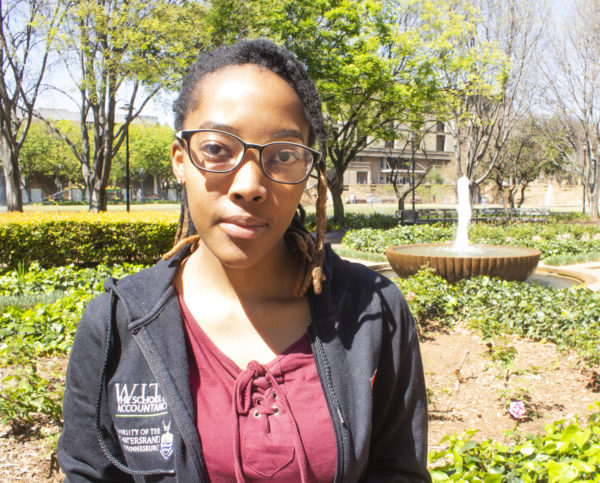 Lerato Khubeka (21) shares her experience with paying black tax long before she has even earned her first official paycheck. Photo: Busang Senne

The common denominator in the discourse on black tax seems to be a popular misconception that the problem is with black families and not the realities of inequality that forces them to create different mechanisms of survival.

Athambile Masola, an educationist, writes in the Mail & Guardian’s Thought Leader that “By highlighting “black tax”, those who we support are painted as people that are lazy rather than people living in an economic, political and social climate that renders them unemployed and often unemployable.”

“The discourse of “black tax” also diminishes the effects apartheid has had on black families,” writes Masola.

Writer Niq Mhlongo edited Black Tax: Burden or Ubuntu?, a collection of stories released on September 10 and written from the perspective of black storytellers who attempt to interrogate this cultural phenomenon in a way that reveals two sides of the same coin.

“The term ‘black tax’ also isn’t acceptable to everyone. Some people take issue with it and say it should not be labelled as a kind of tax, but should be called something else like family responsibility,” writes Mhlongo in the introduction of the anthology.

“According to this viewpoint, we need to investigate and politicise the historical roots of black tax by viewing it in the context of a racialised, apartheid South Africa,” he says.

Masana Ndinga-Kanga, a senior fellow at the Atlantic Fellows for Social and Economic Equality at the London School of Economics has a similar view.

“One of the core findings of the study was rather than pathologise black tax, can we pathologise the system that makes black tax necessary for survival of the majority of South Africans?” Ndinga-Kanga asked at a talk at Wits University on September 6.

As much as the understandings of black tax can contribute to a more holistic view of wealth distribution in an unequal economic environment, it is not to suggest that the lived experiences of black professionals who shoulder the burden of ensuring the survival of generations when formal structures cannot, be invalidated.

“A lot of our parents or guardians have raised us and gotten into a lot of debt … some of our parents have had to sell houses and cars to go to university, so it’s only fair that when we start working and start making some money that we do take care of the people who always took care of us,” said Mookameli Moeketsi, a Wits alumnus who studied a BSc in construction studies and graduated with an honours in quantity surveying in 2019. He started working and paying black tax at the beginning of this year.

However, Moeketsi acknowledges that the burden of care can be overwhelming.

“My experience with black tax has been gruesome, I started working this year and when I started working both of the houses at home were in severe debt and on the brink of repossession by the bank,” said 23-year-old Moeketsi.

The truth is black tax cannot simply fit into categories of ‘either/or’ but what is often the missing piece of the puzzle is viewing black tax as a decolonial framework for liberating black communities through a system that allows one person to sustain another.

“[There are] those who say that ‘black tax’ is an undeniable part of black culture and the African way of living according to the philosophy of Ubuntu,’ writes Mhlongo.

“We also see that there are people who say it is important for them to send black tax, saying that their familiy members were unemployed and they would go hungry without these interventions and they had extra resources to give,” said Ndinga-Kanga.

Black tax has the potential to reform our view on economics but it cannot be neatly defined and package into inflation and credit ratings. Many realities can be true at once – black tax can be frustrating but there can be freedom in knowing if nobody else will save you, at least we can save each other.