Supporters of imprisoned #FeesMustFall activist say he does not belong in jail. 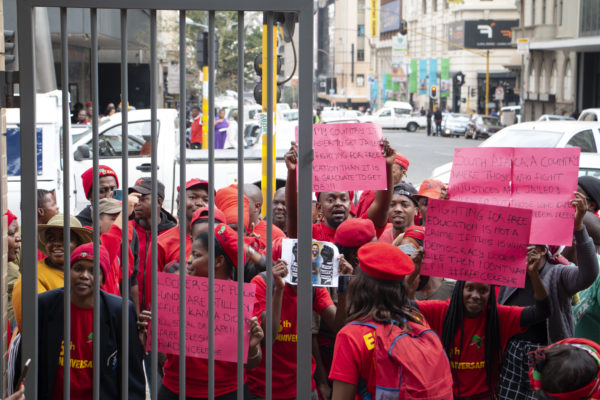 The bail hearing of a #FeesMustFall activist convicted in 2017 has been set for Wednesday, October 9, at the Johannesburg Magistrates’ Court.

The bail hearing was originally set for the South Gauteng High Court, but the state needed more time to file a responding affidavit. Judge Leicester Adams determined that there was no need for the bail hearing to be heard at the high court.

Cekeshe was a first-year student at the Footprint Media Academy in Auckland Park when he was arrested in October 2016 and charged with public violence and malicious damage to property.

The charges were related to the burning of a police van outside the Wits Noswall residence during the #FeesMustFall protests. The burning was captured on CCTV camera and, although the footage is blurry, the state says the perpetrator in the video is Cekeshe.

Cekeshe, who is now 25, pleaded guilty to the charge and was sentenced in December 2017 to eight years in jail with three years suspended. He has been serving the sentence since.

This is the video that was used against Kanya Cekeshe I still maintain that this is not him.. #FreeKanyaCekeshe pic.twitter.com/7uPy9A640m

Cekeshe’s legal representatives believe their client was misled by his previous lawyer into pleading guilty. “The transcript is littered with rookie mistakes,” Ngcukaitobi told the court on Tuesday.

Steyl told a City Press reporter after court was adjourned that, “The first mistake I can see [from previous court reports] is Kanya was not advised on the consequences of pleading guilty.”

Members of the Economic Freedom Fighters Student Command (EFFSC) led a group of about 40 students from various higher education institutions including Wits, to the high court and stayed there throughout the process of appealing for Cekeshe’s bail hearing.

Ekurhuleni East College EFFSC deputy chairperson, Themba Hlongwane, told Wits Vuvuzela, “We are here to give support to Kanya Cekeshe for him to be released. The only thing he did was to fight for free education.”

Cekeshe’s friend, Naledi Gongxeka, a Wits third-year accounting science student, said he had attended the hearing to show solidarity and to follow the case.

“I hope the march [will] raise awareness that there is still one #FeesMustFall activist in prison,” Gongxeka said. 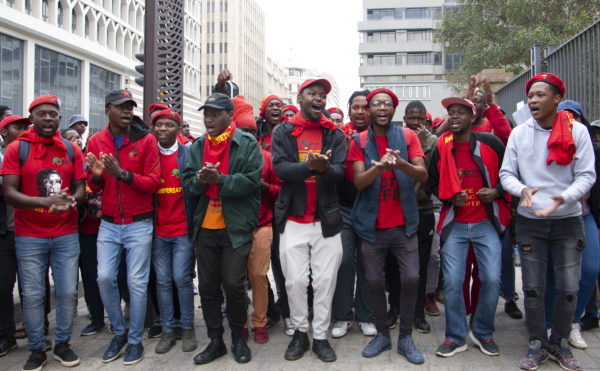 Former member of the Ekurhuleni West College SRC, Thuso Mathebula, said, “We are here to show moral support, although there is nothing tangible we can do. We are hoping for him to be released or get a suspended sentence so we can be with him again.”

The gathering was also joined by social justice representatives and politicians such as EFF members of parliament, Vuyani Pambo and Kenny Motsamai.

“We feel the pain of students and Kanya for two years now. It feels like he is the only one who is forgotten. We are hoping that Kanya gets bail today and sleeps at home,” said Noxolo Mfocwa, an Amandla.mobi campaigner.

Deputy Secretary of the Wits EFFSC, Mmathapelo Tleane, said, “[When the bail hearing takes place] we are still going to be here communicating the same thing that we are here for Kanya Cekeshe as a fighter of #FeesMustFall, saying that he must be released.

“The rapists continue to rape women, they have looters in this country within the state holding high offices but they are not being imprisoned,” she added.

Cekeshe’s bail hearing gained traction with the #FreeKanyaCekeshe hashtag making its way up on the Twitter trending list earlier this week.

Oscar Pistorious was sentenced 6 years for killing his girlfriend
And now Kanya Cekeshe is sentenced 8 years for fighting for free education and your presidents keep saying we are free ,#FeesMustFall#FreeKanyaCekeshe