We can’t breathe! scream the youth

Young people globally are calling on corporations and the government to take stronger action against climate change.

A call to action, reverberated around the world as four million people took to the streets to march against climate change.

The strike, led by Greta Thunberg, a 16-year old Swedish environmental activist who skipped school every Friday in 2018, ttook place from September 20 to September 27, and included international strikes and protests with demonstrators demanding that action be taken against climate change.

In South Africa the youth protested against companies which stand accused of carbon pollution, and called on the government to take global warming ‘seriously’.

“I am not in school today. I am standing in front of you today, not as an activist but rather as a living organism dying with its home, dying with its planet,” said 17-year-old South African, Anna Conradie who stood outside the offices of Sasol in Sandton on Friday, September 21.

Conradie joined about 300 people in a march against the high levels of and toxic pollution emitted by Sasol as “the second-largest emitter of greenhouse gases in South Africa and one of the 100 fossil fuel companies linked to 71% of global industrial greenhouse gas emissions since 1988,” according to the 2017 Carbon Majors Report.

The march against Sasol was organised by Cooperative and Policy Alternative Centre (COPAC) and South African Food Sovereignty Campaign (SAFSC). Both parties convened at a roundtable in July and agreed to “target local carbon polluters”.

In her speech, Conradie pleaded, “We [have] disregarded the planet and used it as a credit card with no limit. We have let people chose profit over protection and we ourselves have done so to.”

At the march, representatives of Sasol accepted a memorandum from the two organisations. Ferrial Adam, a member from COPAC said she hopes Sasol stop investing in coal, “they’ve known about this for years and they haven’t done anything, they’ve attended negotiations but are still polluting, they need to start taking drastic steps”. 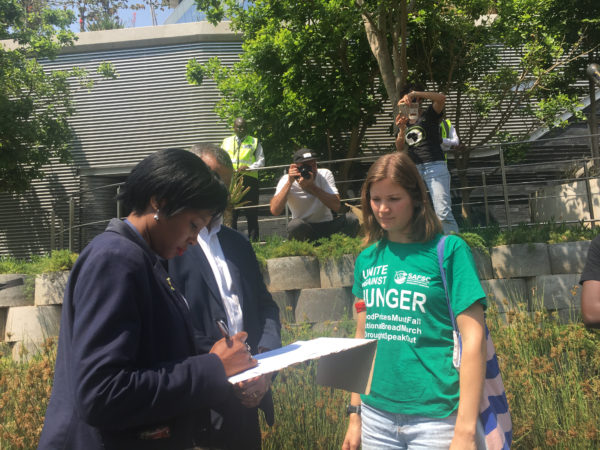 Air pollution and its impact on health

According to COPAC and SAFSC, “about 20 000 people die every year in South Africa from air pollution and there are various respiratory and health problems, including cancers in communities due to toxic air pollution”.

A Wits professor of systems ecology at the Global Change Institute, Bob Scholes, said “air pollution is an increase in the concentration of certain chemicals or particles in the air above the normal background levels to the point where they start damaging people or other organisms”.

The chemical and particles are caused by human activities, but also by natural background sources. These include the “burning of fossil fuels from vehicles, domestic use of stove, industrially heating boiler and petro-chemical processes such as Sasol and the generation of electricity,” Scholes said.

Sasol has  smoke sacs which emit oxides of nitrogen (NOx) and hydro-carbons. When these two gases are put together and “you shine bright sunlight on to that, in the presence of bright sunlight, those react and the end product is tropospheric ozone,” said Scholes.

According to COPAC and SAFSC, “Sasol emits 67 million tons of carbon a year”, through the production of petrol and diesel by mining coal and converting it to oil, which is referred to as the coal-to-liquids conversion. The 2018 Sasol Sustainability Report said that the company produces a total of 67 412 kilotons of greenhouse gases evidentially.

“Sasol by itself is producing about 17% of South Africa’s complete climate effect,” said Scholes. 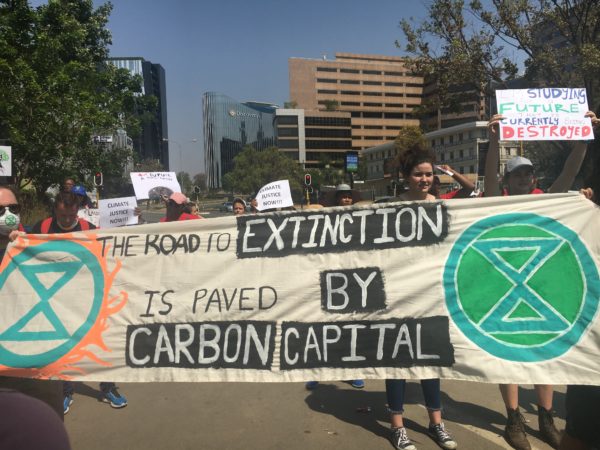 The Council for Scientific and Industrial Research (CSIR) on behalf of the Department of Environmental Affairs, conducted a health study in the Vaal Triangle “to determine if air pollution levels exceed South African air pollution standards.”

Four power plants in the area were monitored.  and the study collected information from 2013-2015 by measuring the concentrations of nitrogen dioxide, sulphur dioxide and particles.

“The measured ambient pollutant concentrations showed that the concentrations of nitrogen dioxide and particulate matter exceeded the standards in some areas,” said the CSIR study.

The study found that the air pollution in the Vaal area was from coal mines, industries, power stations and vehicles.

The groundWork Report of 2017 conducted a study on air pollution and the harmful health impact it has on people living in the Highveld area.

The report, titled ‘The Destruction of the Highveld’ said in the Mpumalanga region, the “burning of coal has enclosed the commons of atmosphere, making it a dirty industrial drain in the sky.”

“At least six decades ago, scientists pointed out that the Highveld was a particularly bad place to burn coal because of the dynamics of the atmosphere,” said the 2017 report.  It added “this did not lead to excluding coal burning industry from the area, but [instead the] massive increase of coal-fired power stations, the location of Sasol 2 and 3 on this coalfield”.

Alex Anderson, senior manager for Group External Communication at Sasol said the company is “is firmly committed to playing our part in transitioning to a lower-carbon economy.”

Anderson told Wits Vuvuzela, “Sasol has taken significant decisions to divert our growth strategy away from further carbon intensive growth paths, and specifically decided on no growth into greenfields Coal-To-Liquids and Gas-To-Liquids, and in new refining capacity”.

Sasol has partnered with North West University (NWU) to develop the ‘green coal project’, which aims to “reduce the amount of carbon dioxide emissions by up to 80%,” said Professor Frans Waanders, director of the Centre of Excellence in Carbon-based Fuels at NWU.

The green coal is manufactured from waste products, which is fine coal and is stored in landfills or slime ponds. “This fine carbonaceous coal waste is converted into green coal by the addition of specially treated plant waste materials, such as grass, or even animal waste” said Waanders. He added the product produced is char, which will be combined with the coal.

A study by Duke University’s, Dr Emily Bernhardt, said that, “Clean coal technologies that capture and store the CO2 generated from coal fired power plants will be good for reducing atmospheric CO2 impacts, but they won’t change the persistent pollutant legacy of coal at the source of extraction, processing and combustion waste disposal”.

COPAC and SAFSC said that “for South Africa to achieve its net zero emissions target Sasol will have to shut down.” 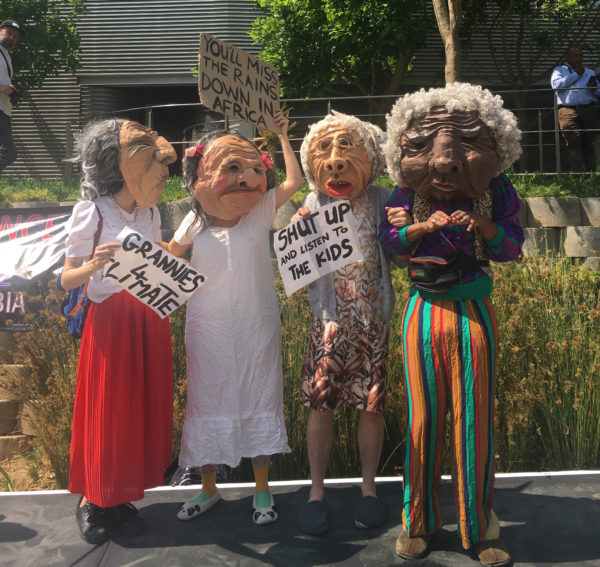 FEATURED IMAGE: Protesters outside of the offices of Sasol demanding that the company takes action in reducing their carbon footprint.  Photo: Lwazi Maseko