A Pulitzer Prize winning journalist shared her experiences about her coverage of the humanitarian crisis in Yemen, during the first day of the African International Journalism Conference 2019 on Monday, October 28. 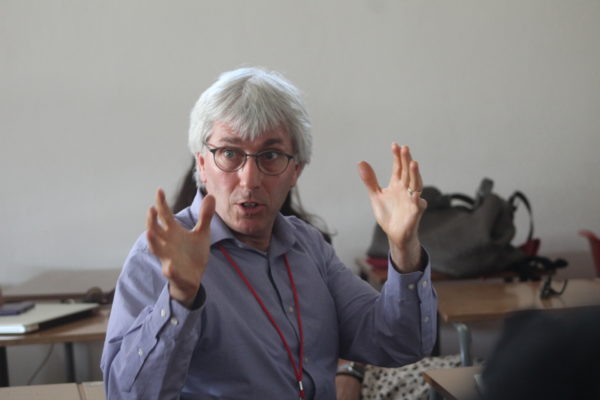 Jeff Kelly-Lowenstein, assistant professor at the Multimedia Journalism School of Communication at Grand Valley State University engages with Maggie Michael and Ron Nixon from the Associated Press on covering Yemen at #AIJC19.     Photo: Michelle May

Ron Nixon, international investigations editor at the Associated Press, said Michael’s team is “the first all-Arab team to win a Pulitzer Prize” for their work.

Her team exposed how Yemenis were not supplied with necessities such as food and vaccines due to corrupt government officials diverting billions of dollars provided by international aid. The government would also not authorise a plane filled with vaccines to land in Yemen.

“The thing about Yemen is that it’s under-reported, meaning that they are a few people asking questions,” said Michael. She, however, mentioned that getting information is not the issue. Whilst the United Nations remained silent, fed-up citizens were very willing to talk. “There is no certain power controlling information, there is information everywhere,” she said. “As an outsider, they don’t see you as bias, so they are more open to giving information”.

Although her reporting has released prisoners from secret detention sites controlled by the United Arab Emirates and has led to some UN relief, she states that Yemen is still in a bad condition.  The award-winning journalist said, “I think in a country like Yemen, every part is acting with impunity because no one is holding anyone accountable. The least you can do is talk about it, spread the word about it.”

As advice to other investigative journalists, Michael said they should create a foundation and seek funding.  “Do as much as you can, and then find the international agency that can help publish or run the story,” she adds.

FEATURED IMAGE: Maggie Michael in conversation about investigative journalism in Yemen and her award-winning work with Ron Nixon, international investigation editor for the Associated Press. Photo: Michelle May