An eight-year-old boy is tortured to death over a period of approximately eight months with nothing but cat litter in his stomach and his mother and her boyfriend are charged with the murder, is nothing short of evil.

The Trials of Gabriel Fernandez is a six-episode limited Netflix series, released on February 26. It is about an eight-year-old boy who was tortured by his mother and her boyfriend for a period of approximately eight months. The torture eventually led to his untimely death on May 24, 2013.

Fed cat litter, picked up while being strangled by a grown man, shot with a BB gun in his genitals, made to live in a cupboard while handcuffed, punched to the point of passing out on numerous occasions and his teeth knocked out of his mouth using either a wooden bat or a black bat: these are the two bats found at the house both had Fernandez’s blood. This is only some of the torture this eight year old boy underwent through while living with the mother and her boyfriend.

Why two people would do this to a small boy is one of the reasons one should watch the series. The series does not give answers to that particular question but it shows how cruel people can be. During the trial jurors said they looked for some emotion from Isauro Aguirre and there was none, he was described as evil.

It’s not every day that a child’s autopsy takes approximately two days to get done for all the injuries in his body to be recorded: it usually takes two to four hours according to the Tarrant County, Texas website and the coroner who testified in the court case. Every single part of his body had bruises and the only thing in his stomach content was cat litter. 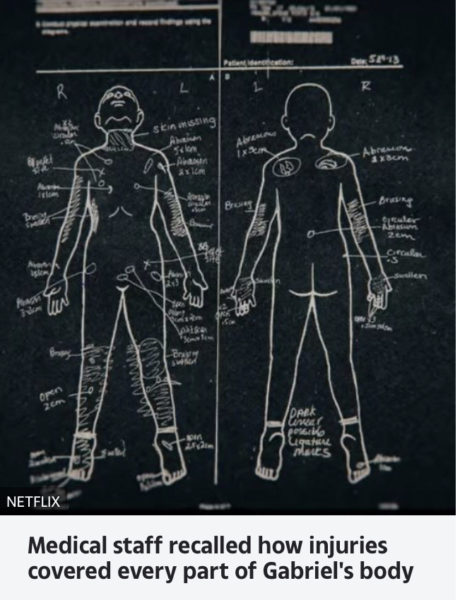 Every day of Fernandez’s life had become a living hell. A Doctor in the series when testifying mentions how Fernandez had fractures on both sides of his ribs of variable ages which he described as hurting a “great deal”, even breathing becomes painful. This is only one of the many injuries     .

Majority of the people involved in this series claim they have never seen a child abuse case quite like this one. Deputy District Attorney of the Los Angeles County, Jonathan Hatami, said as far as he knows this is the worst case of child abuse they [the county] have ever seen and it’s rare to have a child abuse case where they seek the death penalty.

This series is hard to watch because of the gruesome torture the boy underwent in the hands of his mother, someone who was supposed to protect, love and take care of him.  With the mother failing to love him, social workers, the police and teachers could have done more and should have done more to help this child but they did not.

Some of the social workers involved in the case were charged with criminal negligence.

The Rotten Tomatoes website review says “The Trials of Gabriel Fernandez is a very difficult show to watch. But it’s one of those that’s a must watch because it’ll show you how the government agencies that are meant to protect children can often fail.”

CNN in their review said “The main challenge with this kind of documentary series is to identify larger lessons and the key questions raised by “The Trials of Gabriel Fernandez” comes through loud and clear; are we doing enough, as a society, to protect kids and when necessary remove them from dangerous situations?”

This series is a must watch mainly because it shows the gruesome logistics of child abuse, unlike you will find anywhere else. A lesson to go the extra mile for children who are being abused, because the systems put in place to protect children might not be doing enough.