As told to: ‘I feel like this pandemic cheated me’ – matric learner

Matric learner Wanda Nonjinge would rather start again next year than succumb to the pressure of catching up with his academic programme.

The South African minister of basic education, Angie Motshekga, announced on Thursday April 30, matric learners could possibly return to school by June 1 once stringent health and safety measures are in place.

Wanda Nonjinge (18) is a matric learner at Premiere College in Athlone, Western Cape. Nonjinge, who lives with his parents and younger brother, says he is concerned by the minister’s decision to possibly return to face to face learning as he fears there will not be enough time to catch up what they have missed.

Nonjinge, who hopes to study Information Technology, either at the University of Cape Town or the University of the Western Cape, finds online learning challenging because he is not receiving the same support from his teachers as he was before. He is worried that the pressure of playing catch up in June might be too much for him to handle and this might affect his final results.

As told to Akhona Matshoba.

When the lockdown was implemented, I never thought it would last this long. I thought it would just be 21 days. I was excited to get a long holiday, I didn’t actually think about my schooling or studying back then, but as the lockdown got extended, I thought, “Okay that’s it, we won’t be able to recover and we are going to miss out on work.”

My school doesn’t seem to really care, they send us materials from other provinces and sometimes they will send us YouTube videos to watch, but we aren’t exactly having online classes where the teacher teaches us. So, I just do my own thing at home.

I work whenever I feel like I need to do my schoolwork. The fact that we don’t have that a school structure dictating what we should be doing is discouraging because I often don’t know where to start. We have so much work to do and trying to do it all on my own can get overwhelming.

Working from home is very distracting. I will study for 30 minutes, but after a while my mind will start drifting and I’ll start wanting to watch TV or get distracted by something else. I get distracted by a lot of things that would not have been a problem if I was at school. When I was at school, I knew that I had eight hours each day to get my learning in.

At school, there are teachers that are there to pay attention to us. At home, there is no one to really watch me, for the most part I am doing things by myself. It’s up to me to motivate myself to get things done as there is no teacher to remind me. At school, I had at least  45 minutes to focus on a particular subject, I can’t really do that at home because of all the distractions.

And at home, I don’t really have someone that helps me with maths, for example. My brother is younger than me, my father never did maths and my mom did pure maths at school, but she struggles to help me with maths literacy. She tries to help me practice, but it’s not the same. So, I often study with friends and we help each other where we can. 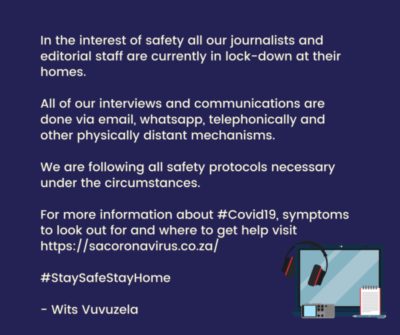 Honestly, I would rather start again next year because then we would have the entire year to prepare ourselves. Before this lockdown, we had only been at school for about three months, so we hadn’t really done much academically. I feel like we are already so behind with the school programme. We have been at home for two whole months and I honestly feel like I won’t be able to catch up, especially if we only go back to class in June.

I don’t mind being delayed by a year if it will benefit me. If we continue like this, my marks might not look as good as I would have wanted them to be. I’m also worried that the quality of my matric certificate might not be as expected. Passing matric well for me means everything, it’s like the gateway to most careers, especially if you want to study further or get a job.

I feel like this pandemic cheated me. I’m not getting all the knowledge or tools I need to move forward. I feel like I am missing out on so much. Things that I would have gained in the classroom or things the teachers would have been able to explain to me better.

I also feel cheated out of the high school experience, like missing my matric ball. Although our school hadn’t yet told us when the matric ball would be, I was already starting to prepare for it. Missing it would be quite sad because events like that only come around once in someone life, it’s one of the best things about highschool and I was really looking forward to it.

FEATURED IMAGE: Matric learner, Wanda Nonjinge, would rather start again next year than deal with the pressure of catching up with the academic programme. Photo: Akhona Matshoba.