Now that community members are not allowed to operate their informal businesses, they are struggling to make ends meet.

Five young men from the Vaal township of Palm Springs have launched a feeding scheme in their community, through which they have been able to serve as many as 250 people who have been financially disadvantaged by the lockdown.

The feeding scheme initiative was launched on April 21, was repeated two weeks later, on May 5, and is expected to take place every second Tuesday.

The founders of the scheme, who refer to themselves as ‘Break Bread with Us’, are: Clinton Ramantso (24), a final-year logistics student at the Vaal University of Technology, Mpendulo Thwala (24) and Kgomotso Ngakane (25) who are both unemployed and Kgontse Rapule (24) and Teboho Nkabinde (25) who are employed as stock and shelf packers by an umbrella retail company.

They young men use the backyard of a vacant house in the community to serve peanut butter and jam sandwiches and rooibos tea.

Spokesperson for the group, Ramantso, says that the feeding scheme is self-funded as they have not yet managed to secure funding from their target grocery stores. “We are currently without a sponsor so every member of the group is contributing from their own pockets, but we do ask for monetary and food donations from our community members.” He adds that the community has been supportive in this regard.

The group was motivated to start the feeding scheme because of the economic challenges faced by many households in the township. “We know that a lot of people here depend on informal businesses (selling vetkoeks and bunny chows) to survive, but now due to the lockdown, they have not been able to generate some income,” Ramantso says. 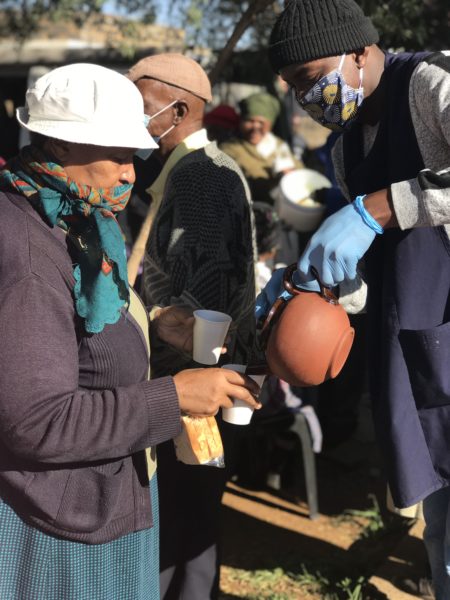 Although unemployed residents take first priority, others are still welcome to receive help from the scheme. “Everyone is welcome to ‘break bread with us’. It doesn’t matter if you’re employed or not, even kids come here to get some breakfast.”

A hundred people were catered for on the first Tuesday and that number increased to about 150 the second time, according to Ramantso.

The group first came together when they hosted a children’s fun day event at a local community park in December 2017. “Break Bread with Us, which is now our foundation, came to be when we decided to host kids’ events during the festive season. We have been hosting the events for three consecutive years, in the month of December,” Ramantso told Wits Vuvuzela.

“The lockdown gave us an opportunity to serve a bigger crowd. This is a chance for us to now serve adults,” he added.

They advertised the feeding scheme on the foundation’s Facebook page, Whatsapp and by word of mouth.

Ramantso told Wits Vuvuzela that lending a helping hand is also recognised as an essential contribution. “NSFAS gives me an allowance, so I use some of that money to contribute towards the feeding scheme. For our other members who are currently jobless, they serve with their hands which we appreciate… so it’s basically a team effort.” 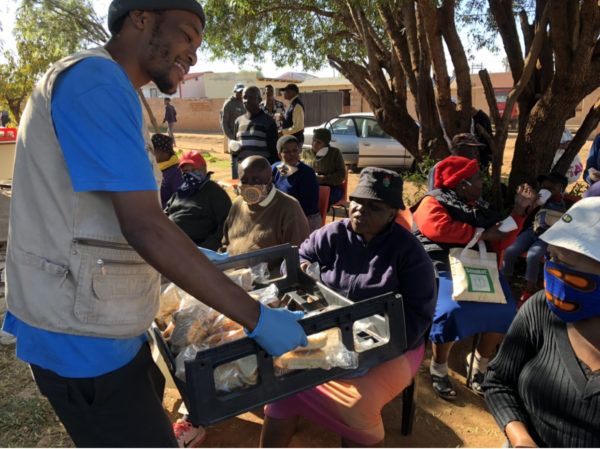 The founders of the feeding scheme are using the backyard of a vacant house to feed the needy and those economically disadvantaged by the nationwide lockdown. Photo: Palesa Mofokeng

Thami Mtshali (64), who lives with his wife and one grandchild who is in primary school, says that the feeding scheme has helped him while he waits for food parcels from the government.

The transport driver for primary school learners says, “I have not been working since the lockdown started because schools are closed, so it’s hard. I appreciate what these boys are doing because our people (the community) are still waiting on the government to deliver the food parcels.”

Another community member who has been helped by the scheme is Noxolo Mphafi (26), who is unemployed. She says the lockdown has hindered her from getting part-time jobs. “I am at home now and I have no source of income. This feeding scheme is important for many of us because we are struggling financially.”

Even though she is a beneficiary herself, Mphafi says that she donates the little that she has. “As young people in this kasi (township) it’s important for us to give them support so that they keep going and don’t lose momentum. As the youth, we should motivate them and keep donating those rands, sugar or that bread. They go a long way.”

Break Bread with Us says that as long as the funds and the resources are available, the feeding scheme will continue. In the long run, they hope to secure sponsorship and to be able to give more than just breakfast.

FEATURED IMAGE: Peanut butter and jam sandwiches are on the breakfast menu for Palm Springs residents who are still waiting for the government’s promised food parcels. Photo: Palesa Mofokeng