The webinar was hosted by the dean of students at Wits, Jerome September and SRC deputy president Rebecca Mahaule. The hour-long session consisted of a Q&A with Tunzi on topics ranging from women claiming space in society, leadership and women making real contributions to shaping the world.

“We are delighted that Ms Tunzi could join us for the first [webinar] in this series. She is using her platform to challenge the world to not only think deeply about beauty, but also to think about the role of women in society and the need for focussed and deliberate attention on the role and development of women in leadership,” September told Wits Vuvuzela.

According to September, The Dean of Student Affairs’ Leadership Conversations is an initiative to contribute to the leadership development of Wits students. “Leadership is not only striving to be the best we can be, but we must also be the best for the world,” he said.

The 26-year-old Tunzi, a self-proclaimed shy young girl who grew up in the village of Sidwadweni in the Eastern Cape, recounted her incredible journey of becoming Miss South Africa and ultimately, Miss Universe. For her however, there was much more to the title than simply beauty.

“Being on this platform gives me such a voice. It was more than a beauty pageant – it was a leadership position. The most important thing about becoming Miss Universe for me was looking at the role as a position of having a voice in telling young people to continue to take up space and to use their voice to make an impact in the world,” 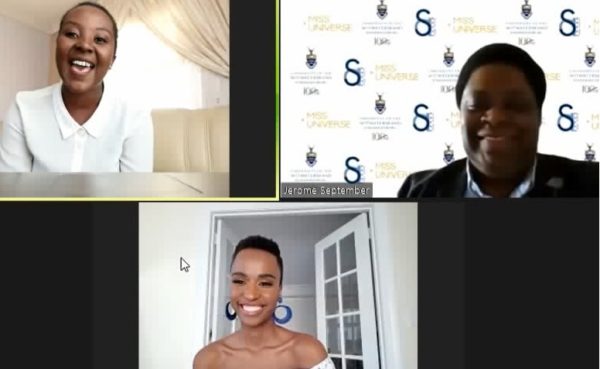 During her rise to success, Tunzi said she has faced various challenges. “After winning Miss South Africa, people told me I shouldn’t go to Miss Universe because I’m not good enough and I’m a downgrade. I wondered – is it because I’m too black? I then realised, if there’s never been a Miss Universe who looked like me, then maybe it’s time there was one.”

This resonated strongly with Mahaule, who told Wits Vuvuzela that, “Zozibini has given me the courage to become whatever I want. It does not matter how you look or where you come from, what matters is being aligned with your dreams and making a difference. Getting into the SRC was very intimidating and Zozibini’s leadership has helped me learn how to overcome and face my fears.”

Yet despite these obstacles, Tunzi said the most important thing to remember is that, “In life you will hear more no’s than you will ever hear yes. But remember – you only need that one yes to kick-start the dreams you want to achieve.”

Member of the student leader constituency at Wits, Lutfiyya Dean, asked Miss Universe, “How, as young leaders, do we deal with pressure from others to become successful in a certain time bracket, as well as stay on our purpose without being thrown off by expectations of what success should look like?”

Miss Universe responded by saying, “You should never put a cap on what you want to achieve. It’s so important to leave space for life to happen. We can’t see the future, so do what you can and trust the process.”

She added that, “You don’t have to be Miss Universe or have a million followers to do the right thing. It starts with where you are. Take up space in your homes and in your classrooms. Shake the tables and if there isn’t space at the table, gate-crash and bring your own chair. Don’t let people tell you who are and what you’re worth.”