South Point workers up in arms over unpaid covid-19 allowances

The private student accommodation company is caught between the Unemployment Insurance Fund and workers stressed by the regulations to control the coronavirus pandemic.

The management of South Point private student accommodation has blamed the department of labour (DoL) and the Unemployment Insurance Fund (UIF) for the delay in paying its workers from the covid-19 Temporary Employee/Employer Relief Scheme (TERS).

“As with all companies and businesses, South Point does not have control over the TERS payment timelines – but we have undertaken to pay employees within two to three working days on receipt of payment from TERS,” said the company in a statement released on Tuesday, August 4.

The statement was in response to a protest by about two dozen South Point workers on Saturday, August 1, who were accusing the company of “robbing” them of TERS payments for May and June.

The government developed the TERS at the beginning of lockdown in March to provide relief, on application, where due to covid-19, employers were unable to pay their employees or employees had to take compulsory leave.

A front desk officer at South Point, Lucas Thomo, told Wits Vuvuzela at the protest that, “We are protesting today concerning the issue of South Point because they don’t want to pay us our TERS money from the government.”

On top of not paying the workers for May and June, Thomo accused the company of short-paying them for April. “Instead of [South Point] paying us at least R4 300 they ended up paying us R2 400,” he said.

Sipho Linda, a representative of the General Industries Workers Union of SA, told Wits Vuvuzela that South Point is not the only company that is having issues with the payment of TERS money. “It’s just that workers in the other companies are not protesting,” he said.

South Point made a similar point in its statement. “As with other South African companies, South Point has noted with dismay the financial stress caused by the delays of the Department of Labour and Unemployment Fund in the payment of TERS funds.

“As with most companies around South Africa and the world, South Point has had to work extra hard to navigate its way through the impact of the covid-19 pandemic on its staff, clients, operations, as well as balancing increased costs against reduced incomes,” read the statement. 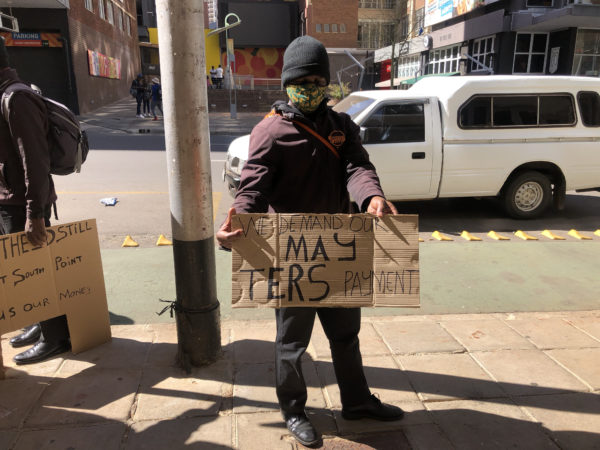 The workers have since returned to work and Linda told Wits Vuvuzela that the union was scheduled to meet with South Point management on Friday, August 7, to address the TERS payment issue.