The mood was sombre as the Wits community mourned the tragic death of the young student.

A group of about 100 people gathered in the cold at the Great Hall piazza at Wits University on Friday, August 21, to mourn the death of twenty-year-old student, Asithandile Zozo.

The first-year BSc biomedical sciences student, who died after sustaining multiple stab wounds allegedly inflicted by a former boyfriend, was remembered at a silent demonstration led by the university’s  Student Representative Council (SRC).

“When it comes to gender-based violence (GBV), I don’t know what to say anymore. My heart is just broken I think everyone’s hearts is broken, maybe ‘enough’ to men doesn’t mean enough,” said Samantha Mungwe, the SRC’s clubs, societies, organisations and student governance officer in her address to the mourners.

Addressing the mourners, Wits dean of student affairs, Jerome September, urged men to dig deep and evaluate their humanity, adding that it is because of GBV that society has been robbed of Zozo’s contribution. 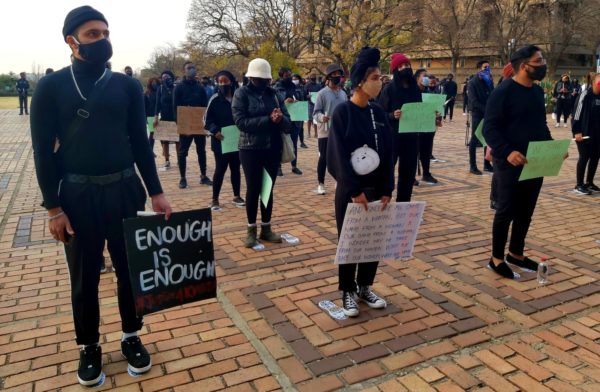 “Over the next few days [we will be] sitting down and saying how do we use our leveraging power as an institution to put pressure on the relevant authorities to ensure that we act, because it is a time for action,”  September said to Wits Vuvuzela.

Speaking to eNCA earlier this week, Zozo’s uncle, Simo Lugelo, said, “What a loss, the girl was brilliant, and the girl was so active and so proud of her future.” “The law must take its way so that he must suffer as this girl has suffered,” he added.

September told Wits Vuvuzela that, although the GBV issue is bigger than a single institution, Wits University commits itself to ensuring that its policies and procedures clearly communicate a zero-tolerance approach towards GBV. September also said it is time for the institution to do more and assess how it can use its position of influence to effect change.

“What we also commit to do is to make sure that the research that we deliver becomes more publicly available. There’s a host of research happening at the institution that helps us understand the phenomena [GBV] and helps us advise in terms of what should be done,” he said.

SRC president, Thuto Gabaphete, told Wits Vuvuzela that it is important for Wits to lead the conversation around GBV and use its reach to lobby for effective policies.  Gabaphete also committed to ensuring that internal structures like the Gender Equity Office (GEO) continue to receive the necessary support.

“They [GEO] are working very hard so we must try and support that office. The institution must pump resources into that office so that some of these things are implemented across the institution,” he said. The GEO handles all instances of gender-based harm and also provides members of the Wits community with counselling and support at no cost.

Third-year biochemistry student, Immaculate Maphanga (21), said that she attended the demonstration to pay her last respects to Zozo. Maphanga said that she is angry that a year after the tragic passing of University of Cape Town student, Uyinene Mrwetyana (19), the student community is back in the same situation.

“Everything is so similar and that makes me angry. Knowing that it’s a year later and it seems like we have stopped in time and it’s the same event happening over and over again,” Maphanga said.

The Progressive Youth Alliance (PYA) chairperson, Cebolenkosi Khumalo, indicated that it is likely that more demonstrations will follow next week.

“We might go to Luthuli House on Monday, [August 24], and Constitutional Hill. We want Dr Nkosazana Dlamini-Zuma, since she was implementing legislation to deal with alcohol and cigarettes, [we want] the same energy put on this matter,” Khumalo said.

The accused charged with Zozo’s murder, Viwe Rulumeni (22), is set to appear in court on Tuesday, August 25, after his case was postponed for further investigation at the Dutywa Magistrates Court in the eastern Cape, on Thursday, 20 August.

NEED HELP?
To get help or to report any instance of GBV involving yourself or someone else, call the Student Crisis Line at 0800 111 331 or email the GEO at info.geo@wits.ac.za.