The show premiered on April 5, 2021 and airs every Monday to Wednesday at 19:30, with the sixth episode being released on Wednesday.

After four years spent acquiring the rights and resources to remake Ugly Betty, uBettina Wethu is finally on our small screens in a prime time slot.

uBettina Wethu follows the life of Albertina (Bettina or Betty) Sikhakhane as she moves to Johannesburg from Hammanskraal. Her goal is to work at a brand management company called Nubia and run by Linda Jiyane, Betty’s role model.

She faces the tough streets of Johannesburg, but it is shown that her naiveté may hinder her more than it helps her. This is seen when her bag is stolen at the first taxi rank she arrives at. After getting a family friend to help her out with this problem, she finds herself at Nubia; and just like Betty Suarez, she is wholly out of place.

Nubia is a trendy company where what you wear speaks volumes about you, and Betty shows up to her interview in a two-piece tartan suit and kitten heels that would be rivaled by any church auntie. She does not get the job. She scams her way back in, however, by impersonating someone else and manages to catch the eye of the boss.

From there on out, Betty is PA to the company’s new managing director, Dingaan Jiyane. He is a playboy and was handed the position by his mother, Linda who is now retiring. Betty shows ambition and confidence when doing her job, but problems arise. Dingaan does not take the job seriously and his sister-in-law, Lakhe Amon, is trying to sink the company. Betty must work around this and grow thick skin.

The show is lighthearted, with some slapstick comedy and good jokes spread throughout the episodes, but there are deeper themes explored. 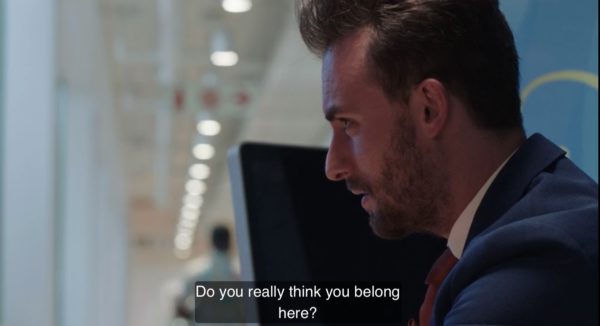 Betty is the oldest and most qualified person in her household, and she must send money home for her father Israel and brother Reggie to survive on. This is a narrative faced by many South African families today, whereby the oldest sibling takes on the responsibility of providing for the entire household. Highlighting the problems of South Africa’s rising unemployment crisis and financial insecurity.

Another theme heavily explored in the series is that of family legacy. Linda Jiyane continually reprimands her son as she leaves the company she worked so hard to build, while he publicly beds clients regardless of having a long-term girlfriend. He also lives in the shadow of his deceased brother, Dumisani.

The production value of the show is high, with trendy lighting and unique locations in evidence.

Where it does fall short, however, is in the acting. The cast consists of local as well as international actors, but the overall acting standard is mediocre. This is understandable, though, as the cast is comprised mainly of fresh talent. Some great comic relief is provided by the character Zaza Moloi, played by Lesego Tlhabi, better known as Coconut Kelz.

The pace of the series is moderate, with Betty performing duties such as throwing together a lavish party and solving problems that arise from it at the end of the sixth episode. She mends the relationship between Dingaan and hip-hop star AJ after AJ ruins the party by using a little bit of harmless manipulation.

There are indications that more drama will still come, and how Betty handles it in her 80s-esque wardrobe is a very exciting prospect. It is a shame that the trope chosen by the writers is that of the “nerdy girl who likes Star Wars” coming to the rescue of an irresponsible playboy who still lives off his mother.

It will be interesting to see how power structures are contested in this show, as Dingaan must face his mother who will put him on the line to get what she wants. And will Betty retain her clashing wardrobe and stay true to herself, or conform to an industry that values looks?

Overall, the show is quite enjoyable and tightly targeted at the youth. There is a certain kind of spunk to it, as well as familiarity because it is a remake of a well-loved show.

The next episodes will be broadcast on SABC from Monday to Wednesday, or you can catch them all on the streaming platform, Viu.