A better quality of life is being promised to residents, as several projects get underway.

On April 13, 2021 the mayor of the City of Johannesburg (COJ), Geoffrey Makhubo, along with his mayoral committee launched the 120 Days of Accelerated Service Delivery campaign.

This campaign involves several agencies working together to tackle basic service delivery issues. “Entities such as JRA [Johannesburg Roads Agency], City Power, Pikitup, City Parks and every single department that is at the forefront of service delivery in the city are deployed to ensure integrated service delivery at the ward level, at the block level, and at the street level in the COJ for the betterment of the communities,” said Nthatisi Modingoane, spokesperson of COJ.

Nthatisi  mentioned that pressing problems within Ward 60 (Newtown and the CBD) include “poor management of taxi ranks, traffic congestion, and illegal parking.” He adds that in Marshalltown, vagrancy and homelessness are key issues.

Students living in and around the inner city will likely have come across one or two of these problems. Karabo Ramasedi, a second year bachelor of pharmacy student, told the Wits Vuvuzela that “there is a burst water pipe [on] Stiemens Street that has been that way for a long time [and that] the burst water pipe has been there for so long that I don’t mind it anymore.” 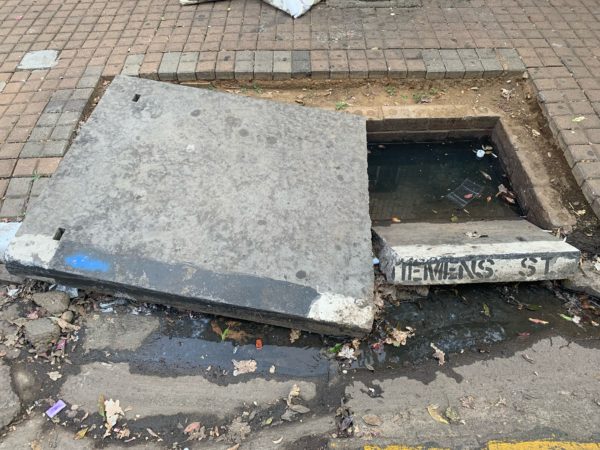 The overflown drain on Stimens Street with broken pavement. A foul smell permeates through the air. Photo: Sumaya Mamdoo.

She adds that “the number of homeless people I see makes me feel a bit unsafe because you don’t know if they could rob you or not.”  She believes that it is a human right to live in a comfortable and safe environment, especially for students that live alone without their families close by.

The campaign began last week with efforts in Ivory Park.  Several agencies such as Joburg City Parks, Environmental Health, Joburg Water, and others are expected to be in the Johannesburg CBD in the last week of April to do their work.