BA sports development third-year student from the University of Johannesburg has qualified to compete for the 2021 Olympic and Paralympic Games in Tokyo.

Yane van der Merwe (21) has qualified to compete for the Olympic and Paralympic Games and is keenly awaiting selection to the official South African team.

Van der Merwe is currently placed 2nd in the Women’s Open Discus for F44 (the class she competes in). She told Wits Vuvuzela, “It is an amazing feeling, knowing that I am second in the world rankings for class F44 Discus.” 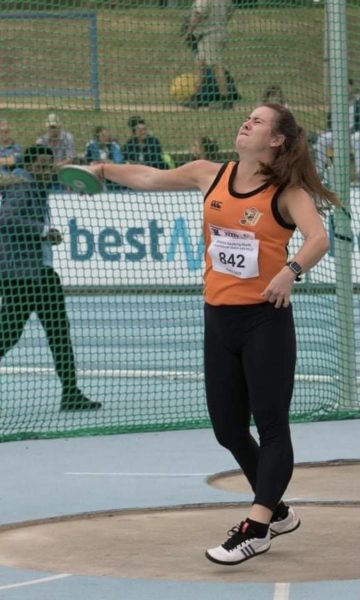 Her personal best throw is 29,92m which she achieved in March 2021, and managed to maintain it at the National Championship in April 2021. She also won two gold medals for javelin and discus, setting a new African and South African record in the discus throw for women. Along with this, Van der Merwe came in 3rd place in the women’s shot put, setting another new South African record.

Despite beating her personal best and setting new records in the country and continent, she is determined to reach even greater heights. “[I am] working hard each day to get that 30m at the next compete (sic),” said Van der Merwe.

Lockdown assisted the para-athlete to work on her technique and strength while training at home or at her primary school. She saw the hard times as “a blessing in disguise”. She said, “It gave me an extra year to work on training and wanting that qualifying distance even more.” She currently trains at the UJ gymnasium and sports fields.

Pierre Blignaut, Van der Merwe’s coach, has been training her since 2019 when she started with a discus throw of 22m. “[He has assisted me in] learning a new technique, motivating me every step of the way, and believing in me,” she said.

She draws inspiration from Anrune Weyers, the South African sprinter who obtained a silver medal for running 400m at the 2019 World Seniors Championship. Van der Merwe added, “Where some see a para-athlete, I see the possibility of running without limits.”

Teams chosen by the South African committee will be representing the nation in the games, which start on July 23, 2021. “It would be an honour to represent my country. Being able to show people that everything is possible if you set your mind to it. With determination nothing can stop you,” she said.