A Wits University student interprets for high school learners and coaching staff at Wits Basketball Academy which is working hard to be more inclusive.

Megan Greaves (21) is a volunteer interpreter for d/Deaf and hard-of-hearing individuals. She currently interprets on call at the Linden Police Station and at Wits Basketball Academy. Greaves is a postgraduate student, reading for a bachelor of arts undergraduate degree, majoring in South African Sign Language (SASL) and anthropology.

Greaves began interpreting for Wits Basketball Academy in 2020, when former assistant coach and chairperson of the South African Women’s Basketball Association, Nompumelelo Ramatsoga, found out she was studying SASL.

Greaves expresses a keen passion for interpreting and tells Wits Vuvuzela, not only about her love to volunteer, but the importance of inclusivity of the d/Deaf community in a hearing society which can often place stigmas on the d/Deaf. 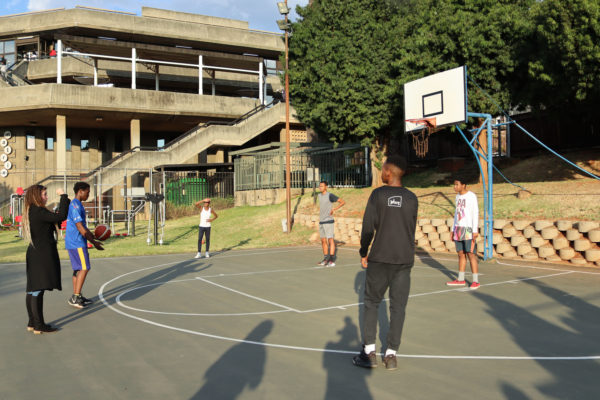 Megan Greaves interpreting for some of the Wits Academy athletes. Photo: Amanda Khumalo

Greaves explains, “I suppose a big stigma is that d/Deaf people are less intelligent than hearing people, this is simply not true.”

St Vincent High School for the Deaf learners, Phumlani Modau (18) and Kekesto Ngobeni (18) participate in the Wits Basketball Academy programme. Modau and Ngobeni both identify as uppercase Deaf, which according to Hear Me Out!, are people who associate themselves with norms, behaviours and beliefs of the deaf community. Most importantly they do not regard themselves as disabled. “Kekesto and Phumlani are very proud of their deafness,” mentioned Greaves during a recent afternoon practice.

Now in their third year, the pair have brought with them a unique identity to the academy. During a practice session at the Matrix basketball courts, one could see that basketball can easily be a sign language sport. The team uses hand gestures such as patting on the head and signalling assigned numbers to call offensive match plays.

Greaves interprets for the coach and team in SASL, relaying messages from English to SASL and inversely during practices. “Kekesto and Phumlani can get by just fine without me because they know English,” said Greaves. 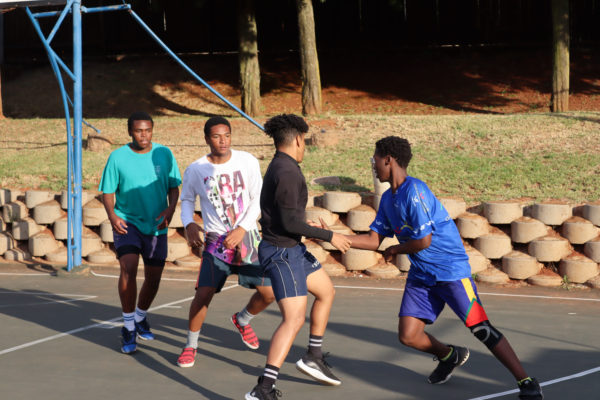 Tshiamo Ngakane, head coach for the university men’s basketball team and coach of the Wits Basketball Academy, tells Wits Vuvuzela, that Modau joined in 2019. Further explaining that there was no way forward or idea of how they would facilitate practices to accommodate Modau, but reassured Modau’s mother that a plan would be made.

“Being hearing impaired is not a disability,” mentioned Ngakane. Though there are discrepancies about whether deafness is a disability or not, some have argued that deafness is a difference like an inability to paint but that does not make one disabled.