The hard lockdown was tough for many, but for one woman, it was the perfect time to become her own boss.

After a six-month break from a consistent monthly income, a woman entrepreneur launched a new restaurant, Mphamelo café, in Braamfontein on Thursday, May 21.

The novice entrepreneur spoke to Wits Vuvuzela about her decision to open a new establishment well into the covid-19 pandemic. ‘‘I realised I can make something instead of just sitting and waiting for a job – which is not easy,’’ said Thandi Mukhari. ‘‘When it comes to being scared of covid, it’s something we have to deal with,’’ she added.

Her business is self-financed with capital sourced from her savings as well as income she earned from baking for her neighbours. The menu at the cafe is a combination of fast foods and traditional food such as tripe (mogodu) and cow heels.

The name of the restaurant Mphamelo, which means dish up in Xitsonga, is inspired by the role she often plays as a cook for her family and community. Mukhari previously worked in retail and finance for a combined 17 years. “I realised that having invested so much in my career and still managed to lose employment – anything can take me down.’’ 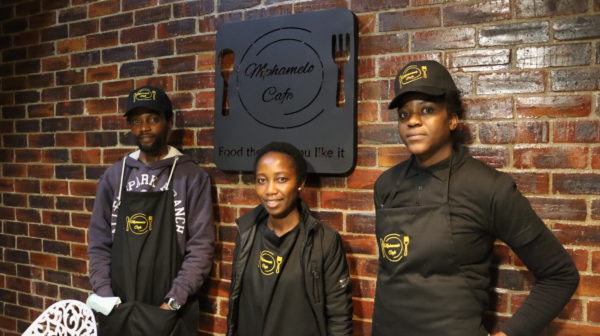 A waitress from Zimbabwe who cooks at the café, Quite Maphosa, had been unemployed for two years, after her job at Monte Casino came to an abrupt end. “My contract was terminated [in] December 2019,’’she said.

There is a lot of pressure with processing incoming orders, but Maphosa is grateful for her new job. “I don’t have a complaint just sometimes we face pressure,’’ she said. 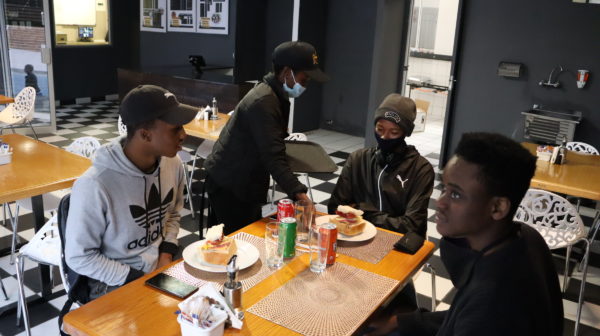 Two first-year students studying towards their bachelor of information technology in business systems, from Rosebank College, shared their experience of the restaurant with Wits Vuvuzela. “The prices are reasonable and affordable,’’ said Siyanda Mhlongo. Leeroy Khubeyi said that the menu reminded him of home.

FEATURED IMAGE:   The owner, Thandi Mukhari inside her restaurant standing next to the logo of Mphamelo café. Photo: Keamogetswe Mosepele