Sumaya Mamdoo is a student journalist for Wits Vuvuzela. She captured the week-long water shortages  in Johannesburg from last Monday, May 17, 2021 and how they affected her family and neighbours in the area.

The suburbs of Brixton, Mayfair West and Crosby of Ward 58 are frequently plagued with water shortages. In the week of May 17, 2021 these areas did not have any water for four days during the week. 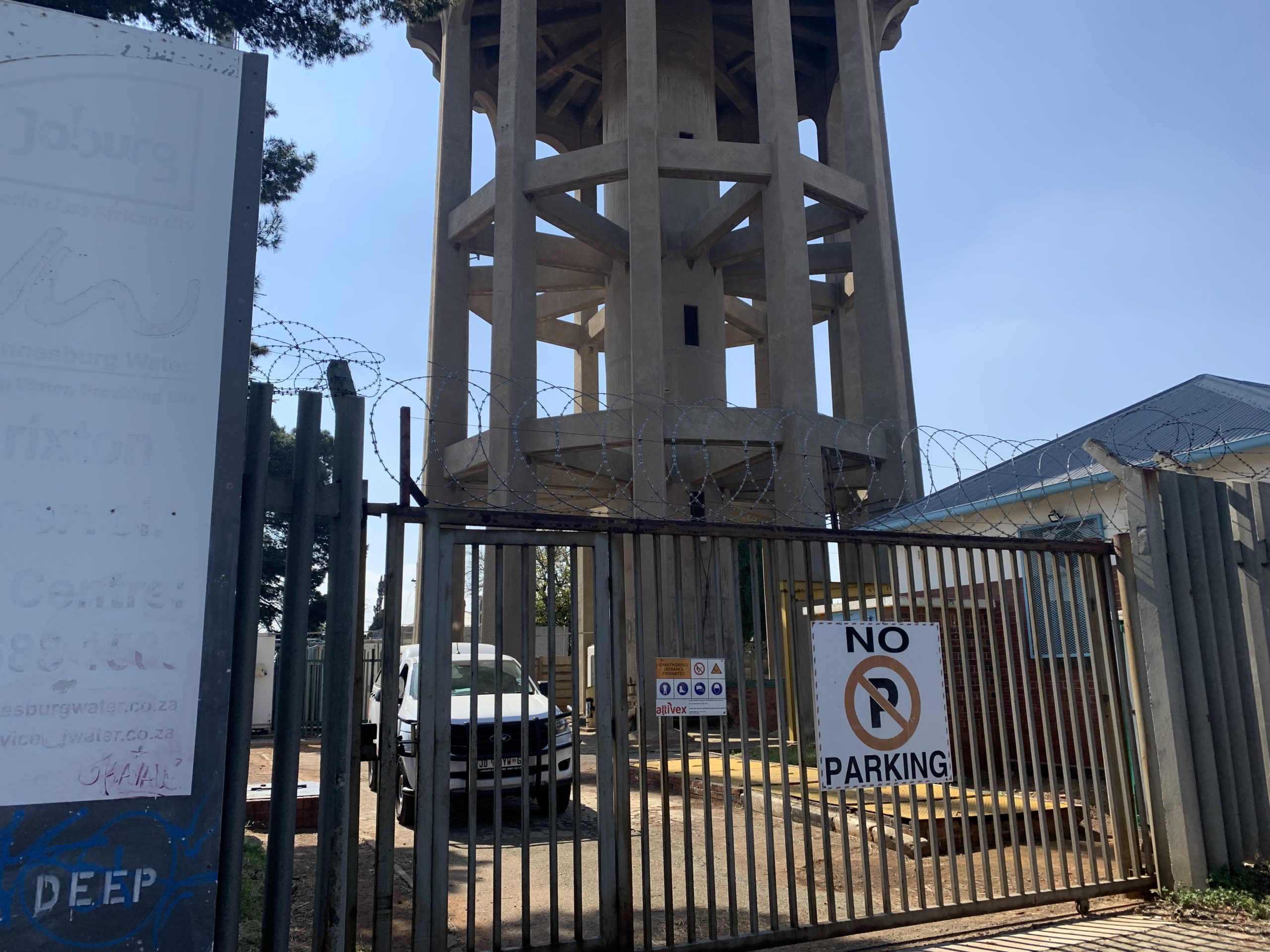 The Brixton reservoir tower with a Johannesburg Water sign that is so faded you can barely read it. Photo: Sumaya Mamdoo

The Brixton reservoir supplies water to the areas of Brixton and Mayfair West , but it does not have a generator. On Monday May 17, these areas did not have water from the morning until the late night due to loadshedding . When the area experiences loadshedding the reservoir cannot pump water from its main supply (Hursthill reservoir). The capacity drops to below 1.5 meters, at which point it completely stops pumping water to the residents. Whenever the power goes off it is expected that water supply will follow soon. Residents have been  fighting for a generator and other water towers to be built, through petitions and talks with the ward councillor. Pumping to this water tower is also difficult as it classified as a high-lying area and gravity must be taken into consideration when pumping. 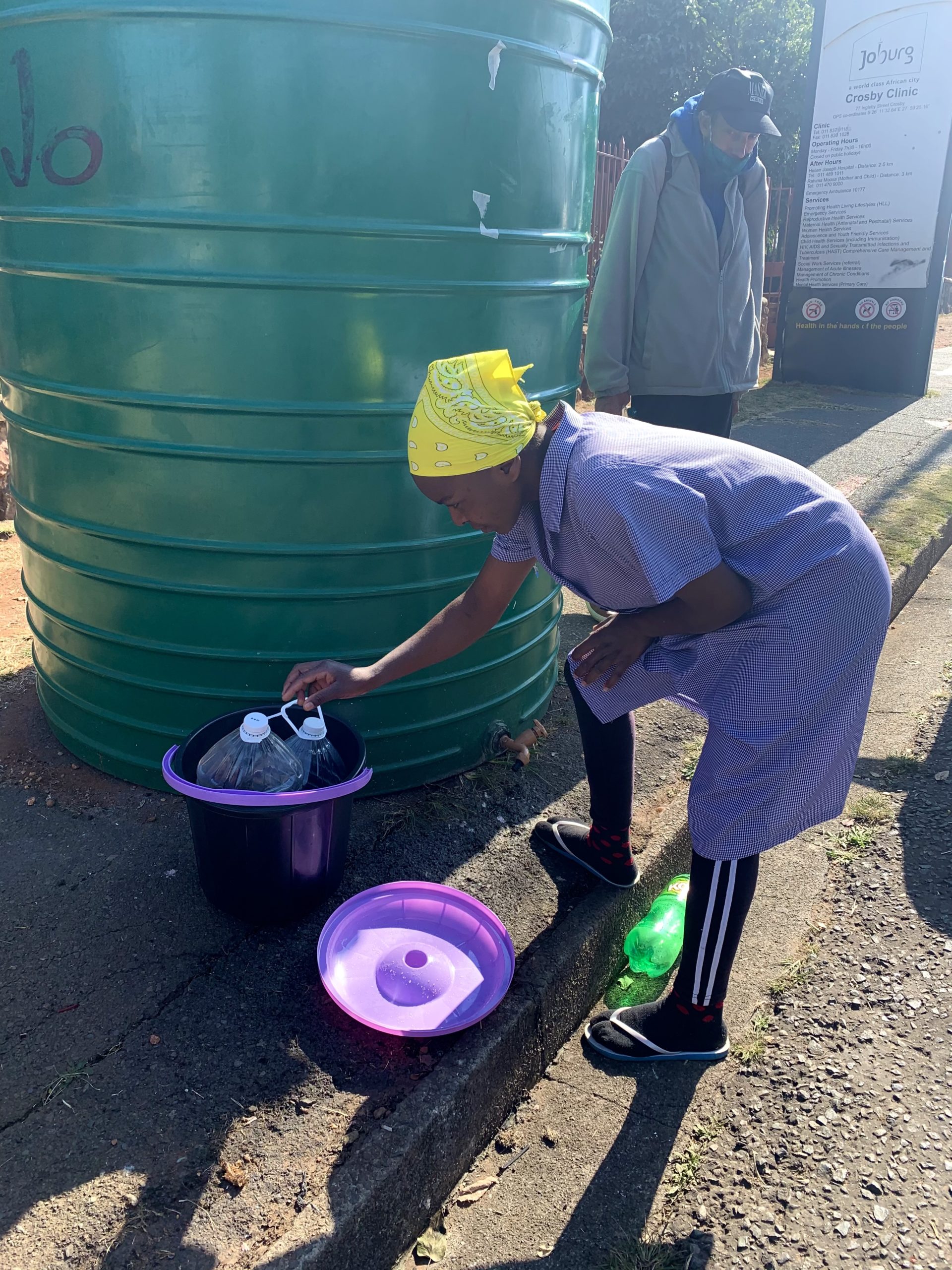 Shaline Mafulzide collects water from a Jojo water tank. She says she must wait at least an hour to fill up her buckets. Photo: Sumaya Mamdoo

On May 19, after a day of having water supply restored, the taps ran dry again.  In a statement, Johannesburg Water said that there were issues at the Hursthill reservoir and that many suburbs of Johannesburg would be affected.  The Hursthill reservoir provides water to many other water reservoirs in different suburbs across Johannesburg. While the statement said many areas would be affected, when calling family and friends in areas such as Greenside, they confirmed that they did have water.  They had also stated that the reason for this interruption was that there were issues with Johannesburg’s bulk supplier, Rand Water. There was no more information provided for context. Johannesburg Water frequently drives tankers around and leaves them in central locations for residents to fill up water.

Naadira Essop (32), a resident of the area, told Wits Vuvuzela that the worst thing about waiting in line for water is seeing the old people and children waiting alone. “Old people leave despondent, and the children are not safe [as the waiting creates opportunities] for beggars to come.” She adds that having no water is difficult especially because she is a Muslim. Muslims are required to make ablution before doing their daily prayers, yet the lack of water means they cannot do this. 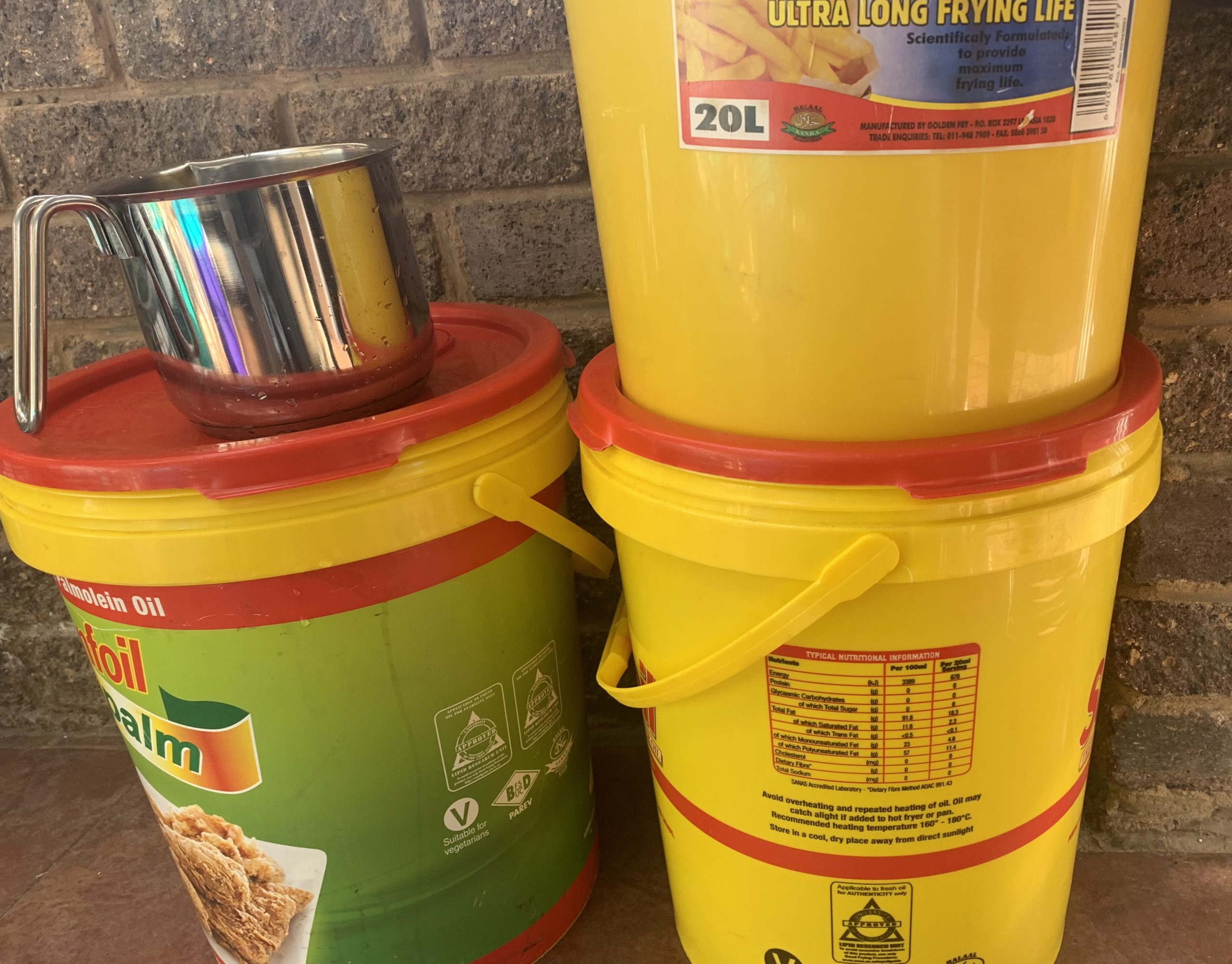 20 litre buckets are filled and stored in my house as soon as somebody says that the water pressure is getting low on the street group chat. Photo: Sumaya Mamdoo

Water is frequently stored in these buckets in my house. We fill three each time there is loadshedding in Brixton and keep them for a few days. Jugs are used to transfer the water into smaller containers, or for when something needs to be rinsed.

Mumtaz Suffla (47), another resident of the Crosby area says that her “[elderly] father-in-law always keeps 5 litre bottles filled whether there is water or not.” She adds that this is done because elderly people like to be self-sufficient. When asked how she copes with a small child she says, “young children adapt easily,” and she prefers rag bathing her son in winter. For the week she says it was difficult to drink water because using the bathroom would be hard as she uses one of these 5 litre bottles to fill the cistern of her toilet, but it is difficult. She also makes use of a water tank with a hosepipe from her neighbour. 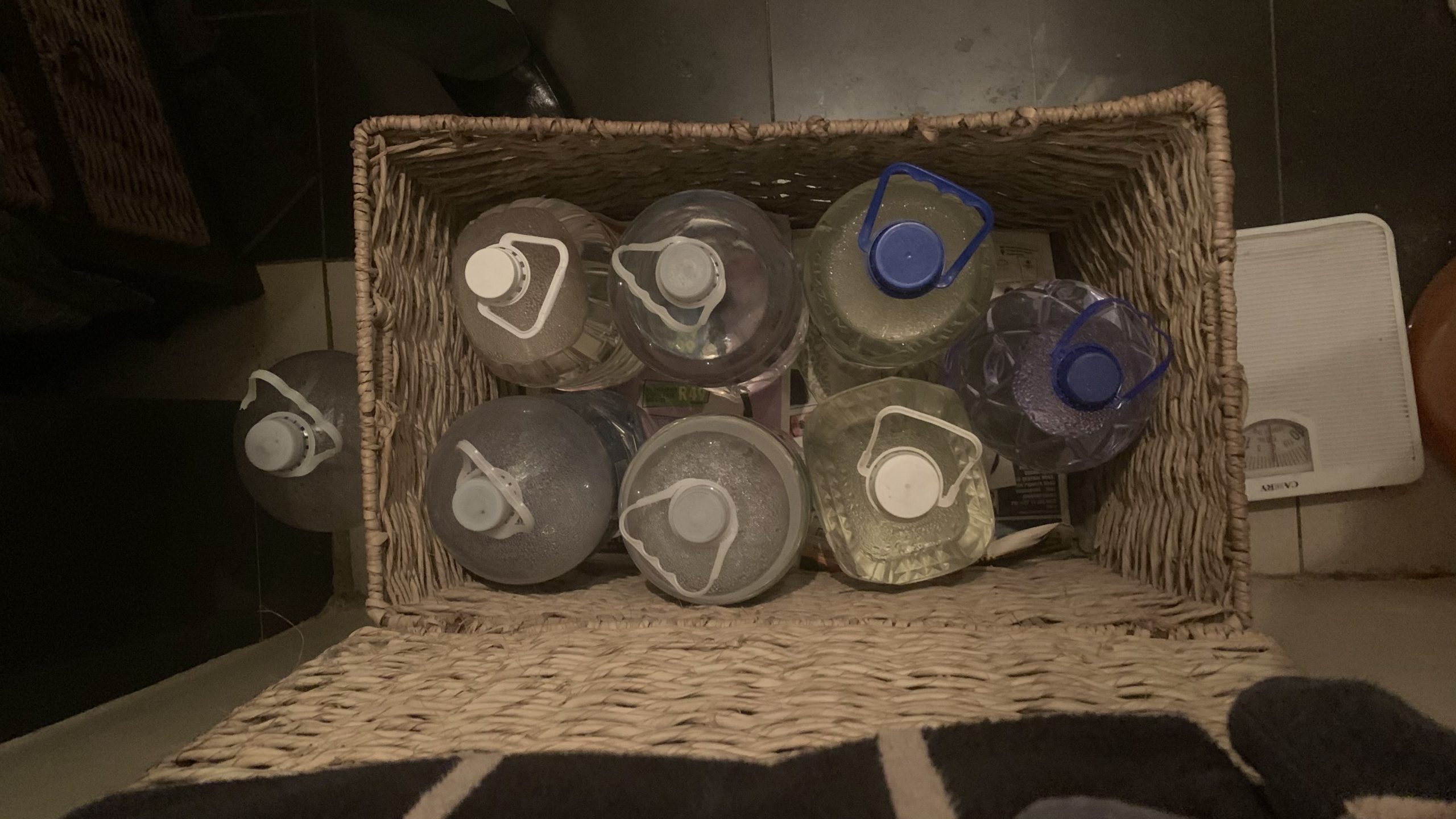 Water bottles in the Suffla household stay filled and kept in this box for any situation that arises. Photo: Sumaya Mamdoo 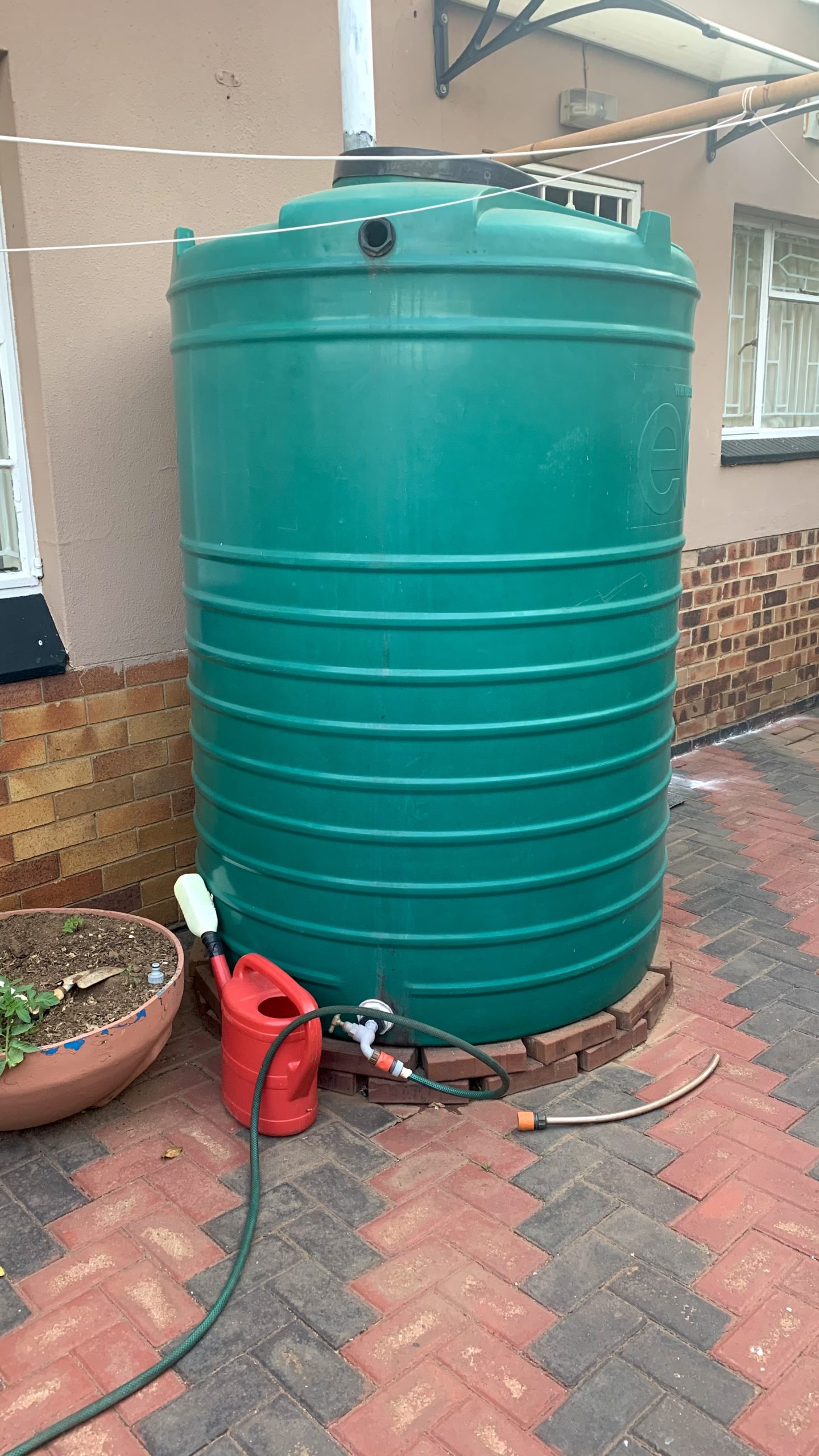 Rabia Nabee (62) has a rain storage tank. She makes use of this water in every way she can except for drinking and bathing. She also shares her water with her neighbour Mumtaz Suffla. It is common to see people with boreholes offering water to residents when there are water shortages. 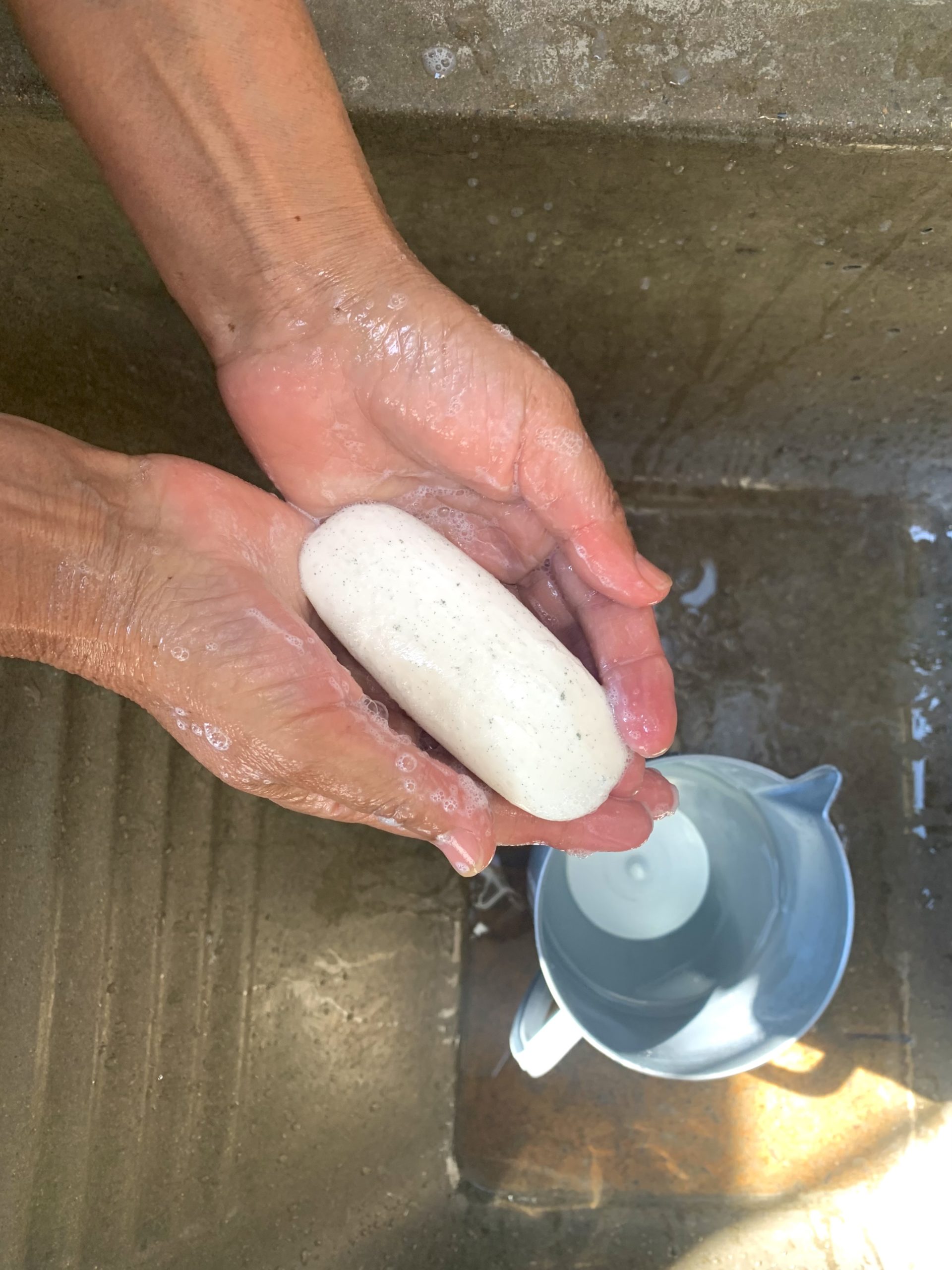 Without water it is more difficult to wash hands. Photo: Sumaya Mamdoo

Water forms part of our daily life and is important for sanitary reasons above all else. During the covid-19 pandemic it is imperative to wash your hands frequently. In my household this was done with the help of someone pouring water over the other person’s hands. It made going out trickier as the possibility of washing all germs off your hands is not guaranteed. Other sanitary situations that arise from this is the piling up of dirty dishes as well as the problem of showering. I would go to other family members houses to shower after university. This slowed down my workflow and interrupted my daily routine. 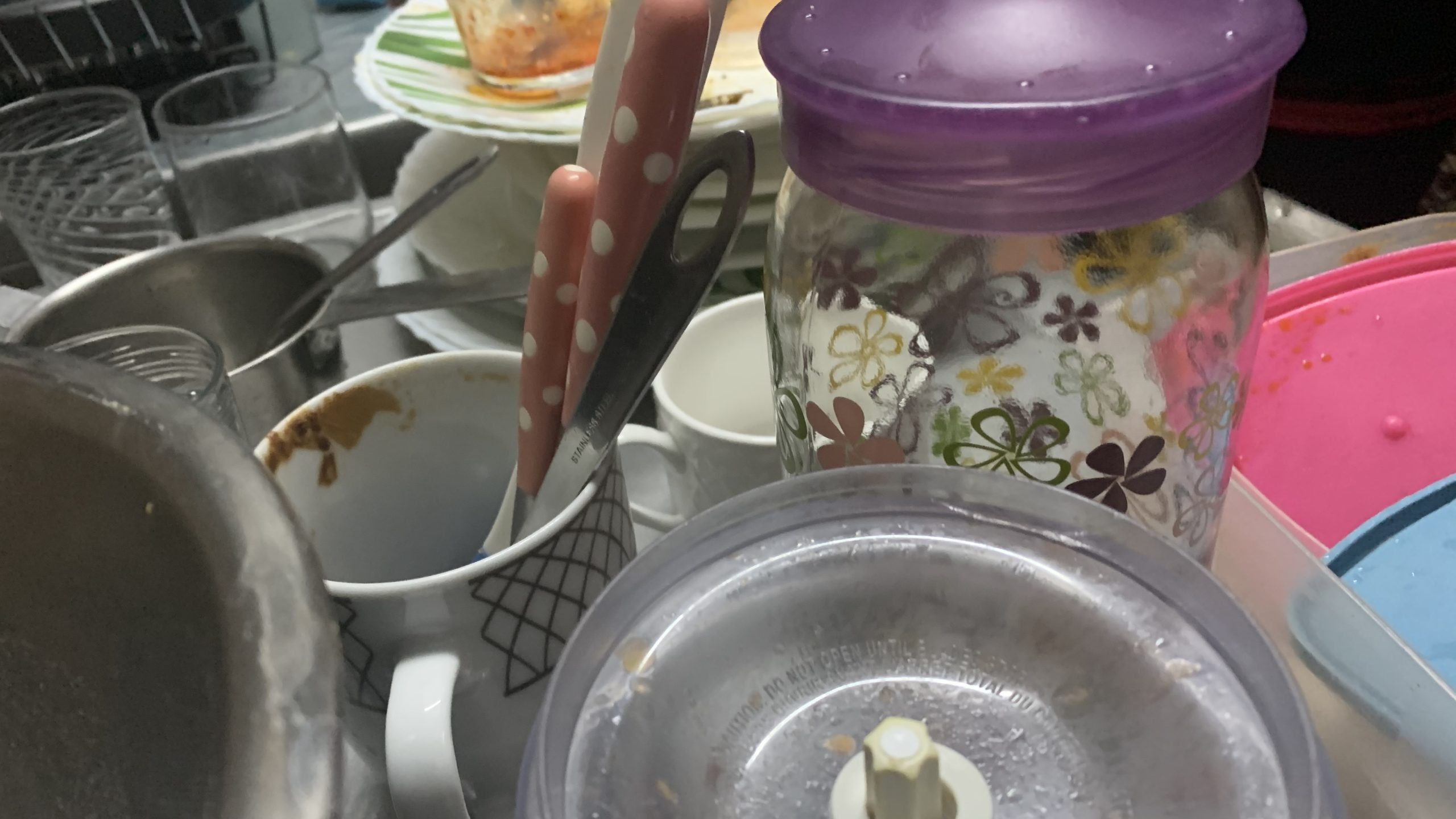 Piles of dirty dishes lay in my house until the water is restored. This, and the laundry, are my mother’s main concern whereas mine is showering. Photo: Sumaya Mamdoo

Water was conserved and recycled as the basins remained filled a little bit to wash the necessary dishes. Rainwater that we collect was also used to fill the toilet cisterns. 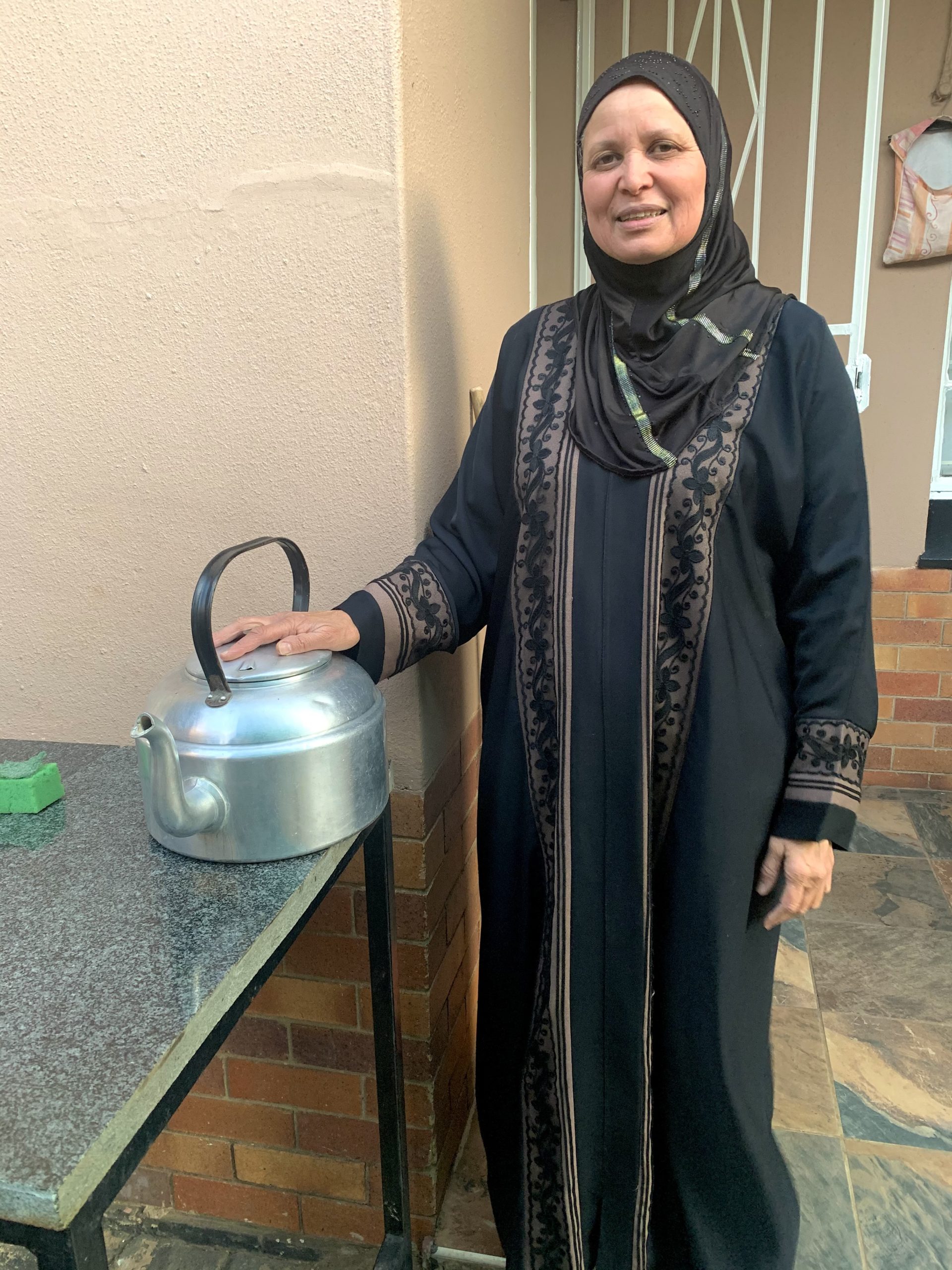 Rabia Nabee poses with what she calls her “geyser”. Photo: Sumaya Mamdoo

Rabia Nabee also says not having water is frustrating especially because one day residents will have but the next day they will not. Showering becomes a problem as she has to fill this pot with water, heat it on the stove and then take a bucket bath. It is also difficult to fill buckets of water with just her and her husband in the household as they are elderly. She wishes that the municipality will just tell the truth as “they cannot be repairing infrastructure every day.”

There were two statements put out by Johannesburg Water during the week that said that the situation at the Hursthill reservoir had improved and they were slowly pumping water into the Brixton one, but water restoration would take a while as the area is high-lying. On Friday, May 21 however, this had changed and the statement by Johannesburg said that both the Hursthill and Brixton water supplies were critically low. There were still no updates on the situation between Johannesburg Water and Rand Water. Water was only fully restored on Monday, May 24 as they started pumping on mid-Sunday Afternoon.

FEATURED IMAGE: An awkward tap at the bottom of a water tank supplied by Johannesburg Water. Photo: Sumaya Mamdoo