Investigative reporting has no gender

Journalists defy that journalism has a gender during the #GIJC17 Women and Investigative Journalism session this morning.

END_OF_DOCUMENT_TOKEN_TO_BE_REPLACED

SLICE OF LIFE : Be fully present in every space you exist in

WHEN I was 17-years-old I published my first article on Destiny Online. The title for my article was ‘The unapologetic woman’. At the time, the talk and ideas around feminism or being “woke” were not a popular discourse to me and my generation. But after timeless tries at getting published, following a need to be heard and understood beyond the surface of being a teenager with great ambition, Destiny Online gave me the platform.

What inspired my words was the position in the world in which I found myself. As a young black woman living in “rainbow nation” South Africa, it became important that I speak from my experiences. And make public my insecurities about being socialised into these many boxes the world had prepared for me, before I could even spell or be acquainted with my agency.

I was a young girl at an all-girls school in the Eastern Cape who made it her business to be involved in every aspect of schooling life, from sports to music, arts and leadership. I wanted to do it all, but the setup of our world and the spaces we become socialised into didn’t really accommodate that. This kind of person was doomed to produce the reality of being a jack of all trades and  master of none, a misguided soul with no clear plan or ambition. But what became constant with all that I did was my desire to empower young women and girls, not so much with talk, but written work and in practice, through
example.

When I came into university, I tried to tame myself and divorced the young girl who was curious to know and experience it all. This only lasted me in my fresher year and it was in my second year
where I returned to what was more familiar to me. I became actively involved with Wits Sports, joined the Wits Citizenship and Community outreach program (WCCO) as Math and English tutor for learners in the Alexandra Township. It was also in this time that I merged my love for service and journalism, when I joined student leadership and Voice of Wits FM. Here I felt more fulfilled and through many talks with my lecturers I found an understanding to this colourful box I called my life. My experiences gave me a greater voice to how I believe students on campus should be.

As university students we are positioned in a place of privilege more than anything to access information, experiences and opportunity to learn from each other. And we ought to adopt inquiring minds and an openness to be fully present in every moment in our university journey. It would be unfortunate of us to pay the thousands we do, only to get out with a certificate of validation on our learned abilities from the lecture halls. Ours should be the extended mission of being pioneers, leaders and visionaries who are both purposeful and impactful wherever we exist. When I took on the journalism honours programme, I had a slight anxiety as a person who was politically aligned, a journalist and a student leader. I feared the same reception as that of ANN7 reporters. The idea that people would question the credibility of my work because of the anticipated conflict of interest concerned me.

But it was political activists and journalists such as Robert Sobukwe and Ruth First who helped me understand how journalism plays a good and important role in our democracy. I believe we need more public servants and journalists who push the agenda for a transparent and accountable government. As a student journalist and student leader, I believe I have a good and not necessarily perfect story to tell. 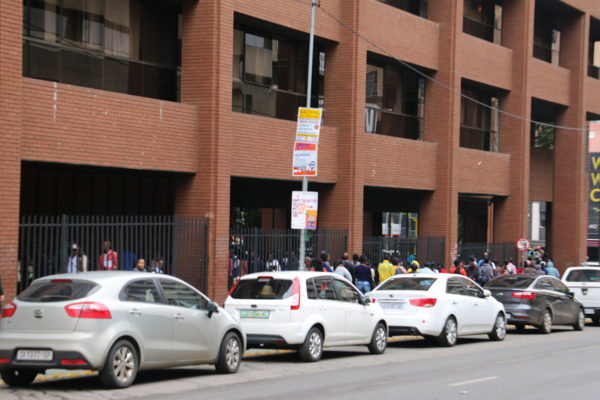 END_OF_DOCUMENT_TOKEN_TO_BE_REPLACED

AN ONLINE textbook site, called SIKIO, established in June, was finally launched at the end of September.

Third year BAccSci student, Ndu Nkwanyana (21), who is the co-founder and CEO of SIKIO told Wits Vuvuzela what inspired him to create the site. “At the beginning of the year I realized that I had many textbooks from over the years that I was not using. I decided to give them out for free but at times would struggle to find people who wanted them,” he said.

END_OF_DOCUMENT_TOKEN_TO_BE_REPLACED

Wits University’s oldest residence, Men’s Hall of Residence, will be slaughtering a cow to celebrate their 95th birthday on September 29.

END_OF_DOCUMENT_TOKEN_TO_BE_REPLACED

THIS YEAR’S JOZI Book Fair is moving off the Wits campus and will be held at Mary Fitzgerald Square in Newtown on August 31 to September 3, 2017.

END_OF_DOCUMENT_TOKEN_TO_BE_REPLACED

WITS THIRD year students have started an online thrifted denim store called What the Denim. The store was launched on Monday, August 14. Owners of the store Onelela Jijana (21) and Lukhanyo Somlota (21) spoke to Wits Vuvuzela. END_OF_DOCUMENT_TOKEN_TO_BE_REPLACED

A restaurant on Wits West campus has started an initiative to empower female students by offering self-defence classes. Rita Berdanis, the owner of Zesty Lemon, says she got the idea after hearing about women who had been victims of violent acts.

END_OF_DOCUMENT_TOKEN_TO_BE_REPLACED

The student community at the Wits Junction Residence has collected over R5 000 for a cleaner whose home in Germiston burnt after a fire broke out nearby.