The Highs of Higher Education

Marijuana is a part of campus life a Wits University, a Vuvuzela investigation has revealed.

Wits students and some outsiders are part of the ma rijuana trade at the Walter Milton cricket Oval on East campus.

A Wits student dealer, who asked to remain anonymous, said he came from a poor background and selling marijuana helped him to get “girls, nice shoes and parties”.

He also said he was “a good guy who gets good grades”.

The student dealer said he led the move of marijuana smokers and sellers from the basketball courts on east campus to the cricket field. He said he sold joints for R10 each.

Vuvuzela asked a student about his involvement. He asked not to be named but was forthcoming about his activities.

The student regularly buys marijuana from dealers on campus. When asked about his concerns regarding being caught by campus control he replied “they only come like every third Friday”.

The student gave his permission to be followed through the process of buying marijuana. He approached a group of men sitting together and asked to buy a “joint” (marijuana rolled in paper like a small cigarette).

He waited for a few minutes for the dealer to bring the joint but he was busy down at the first year parking lot. The buyer ended up buying the joint from another dealer who was not sitting with the group of men.

The lone dealer sat rolling joints as another male stood guard for him while intermittently reading from a Wits library book.

Vuvuzela repeatedly contacted Campus Control by phone and e-mail but had not received any comment by the time of going to press. 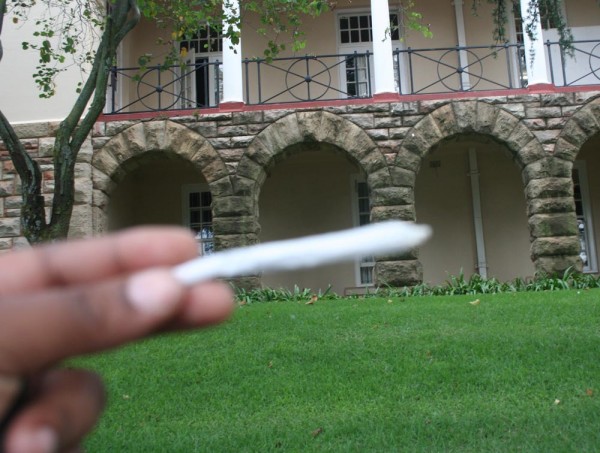