After an “overwhelming week” of donations, the Wits SRC reached its R1-million target today through a combination of contributions and pledges. However, the SRC is set to continue raising funds since that R1-million is not enough to cover all 2 788 students who did not receive National Student Financial Aid Scheme (NSFAS) funds.

Kalla said the R1-million would only cover the registration fees of about 100 students. The SRC said it would “intensify” its efforts to raise funds after the success of the “One Million One Month” campaign.

“A million means we’ll help 100 students’ lives but at the same time you want to change more students and you want to say you did it in a responsible way,” Kalla said.

While the initial R1-million target was reached, most of the money was committed as pledges and is not yet in the bank.

“We’ll have to allocate the funds then we can really say we have reached our goal because students are getting registered,” Kalla said.

The SRC still needs to come up with a criteria on how they will allocate the funds fairly and responsibly. Kalla said they are considering first helping students who performed well academically and then helping third-year students because they will be finishing their degrees.

“This weekend we will have to sit down and decide because we want the funds to get to students as soon as possible,” Kalla told Wits Vuvuzela.

After the students have been registered they will have to take responsibility of paying for the rest of their fees. Though Kalla said the SRC will try to help where they can.

“Students also need to come to the table and try and do their best to get funding because you will now be registered and will have until the end of the year to pay your fees. So it’s going to be a collective effort by students and by the SRC,” Kalla said.

The money that will keep on coming in after R1-million will go to the humanitarian fund.

“The purpose of the humanitarian fund is not to fund student fees, it’s to fund things like outstanding payments that stop you from graduating, its upfront payment fees, emergency things, food, necessities … not pay your entire fees,” Kalla told Wits Vuvuzela.

The Wits SRC is now urging the people who have pledged to go to the bank and send the money quickly. According to Kalla if students are not registered in time they will not be able to do after the end of the month.

“The most important message is that even if we have reached the R1-million that was our target, that was not our goal, our goal is to change as many student lives as possible, a million is just a drop in the ocean,” Kalla said.

Q & A with Shaeera Kalla 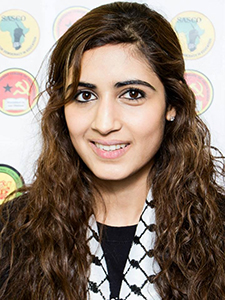 The Wits SRC has made national headlines with its “One Million One  Month” campaign to raise R1-million for students in need of funding. They’re quickly approaching their goal with R780 000 pledged. We spoke to SRC deputy president Shaeera Kalla.

How is the campaign going ?

This evening we received R100 000 by an organisation that prefers to be anonymous for now. The campaign has really taken off very well, we are however running against time so it is stressful but at the same time rewarding to see how much it means to students and how eager everyone is to get involved.

How is raising the money different to protesting?

Protesting gets you the attention you need to draw people to a certain issue and to make them think about it in a critical, raw and real way. There is ample benefit in protest action and we as South Africans know this better than any other people. There comes a point, however, where one needs to be practical enough to understand that in certain circumstances protest action alone will not have the relevant effect.

What are the challenges the campaign is currently facing?

The campaign’s main challenge is that we now need to look at a fair criteria through which we allocate the funds that were raised because a R1-million is extremely small and will never cover all 2 419 students …  It is good to know we can raise money but at the same time a crisis this size needs government intervention.

We are awaiting the official university Financial Aid and Scholarships Office reports which detail how many students are affected … We need these reports urgently before we can process any funding or finalize a method of processing the money. These students are not charity cases they are deserving recipients of financial aid.

The R1-million will not cover all the students, what plans do you have for those who will not be covered?

We will be compiling a report on the experiences of students who were on NSFAS. I’m not sure how we are going to solve this but again, it is a crisis, we are students who are responding to it … We call upon Wits University, NSFAS and the Department of Higher Education to resolve this crisis so that our students can complete their studies, and for some at least, begin their university careers.

Wits has raised up to R780 000 to help students who have been unable to register because of funding issues.

Around 2788 students were left stranded when NSFAS  (National Students Financial Aid Scheme), rejected their applications due to insufficient funds. To address the issue, the Wits SRC launched the “One Million, One Month” campaign during the Wits Welcome Day (February 9), in hopes of raising money for the remaining students who cannot afford registration.

So far R300 000 has been raised through pledges, commitments and contributions from NGO’s, alumni, and members of the Wits community. An additional R480 000 was raised through corporations and individual donors.

“We’ve got commitments and contributions for about R300 000 but there’s no money in the bank … the money hasn’t necessarily come in”, said Sheera Kalla, SRC deputy president.

Mkosazana Dubazana, BSc Hons Geography student contributed R200 to help the campaign. “I wanted to help the students but it was also an extension of my religious practises … I tithe (give a donation at Church), and I was inspired to contribute to society in other forms not just through church”, she said.

The “One million, One Month” campaign will not solve the NSFAS national crisis but the contributions will help in the registration of some students.

“So yes, we might not be able to raise R174 000 000 (SRC’s estimated shortfall) but we will be able to actually change quite a few students [lives] just by allowing them to register because at the end of the day you have the rest of the year to save, but if you are not registered then you are not a Wits student”, Kalla said.

Another student, Aaisha Dadi Patel, BA Hons Media Studies, contributed R100 and said she believed in the cause. “I am proud that the SRC is not saying let’s go and have a protest. I mean we’ve done that and we’ve seen that okay you can make a noise but what can you do to effect actual change … I think the people running this have good heads on their shoulders and they know what they are doing.”

To make a pledge visit www.witsfoundation.co.za