Wits urges students to save water

Students encouraged to report water leakages around the campus. END_OF_DOCUMENT_TOKEN_TO_BE_REPLACED

Graduate tax is a possible solution to education fee crisis

A GRADUATE tax was suggested as a way to help fund free higher education because wealth tax alone won’t solve the education fees crisis, said Judge Dennis Davis, chair of the Davis Tax Committee, at a panel discussion on whether wealth tax would make a difference to the government’s budget.

“There really isn’t money for free higher education [right now]. And there is even less money in the budget than last year because of the economic recession,” said Davis, who chaired the discussion, hosted by the Wits University School of Governance (WSG) on August 21st.

But what is wealth tax? Professor Imraan Valoodia, Wits’ dean of commerce, law and management, who was one of the panellists, explained, “Wealth is defined as all the things that you earn that are outside of your income. It’s the asset base that you have and the things that you own. So with wealth tax, you’re taxed on the holdings of those assets. So the more assets you hold, the more taxes you would pay.”

Wealth tax is not the sole solution to the higher education crises, Valoodia said. “There are good economic grounds for why there should be a graduate tax.”

“In my view, the essence of the fee problem is that you have people who need to pay fees now. If they pay fees and they graduate, then we are almost sure that they are going to earn much higher incomes. You can give someone money to pay fees now and collect the money back when they start earning incomes,” he said.

Professor Pundy Pillay, WSG research director, shared Valoodia’s sentiments that wealth tax should be one of the avenues. “We are not achieving what we need to in education and health to address issues of inequality,” said Pillay.

Personal income tax is the biggest source of tax revenue for the government, according to National Treasury’s 2017 Budget Highlights. “Growing the economy by 5% or hiking tax at 5% from about 1.5-million tax payers, we would have about an extra R50 billion in the kitty to spend and start dealing with the issues of higher education,” said Davis.

Justin Logie, a master’s student in accounting who attended the event, said he didn’t think a wealth tax was the best way to fund higher education. “The best thing is to have some kind of contribution that is then tax deductible,” he said. “So companies make a contribution and then for that contribution they get a tax refund.”

“You don’t want the effective tax rates on companies to go higher because then they just go overseas. And you need to keep companies within the country in order to make sure that they continue to employ people,” said Logie.

Davis concluded that, “all people in South Africa should be responsible for this country and its development. We need a government that delivers on equality to reconstruct our society.” 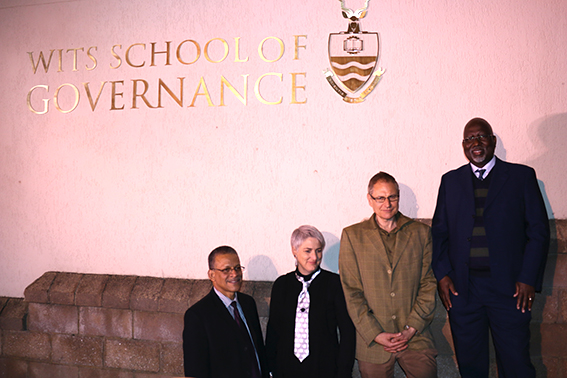 The Wits Graduate school of Public & Development Management (P&DM) officially changed its name yesterday at a ceremony at the Donald Gordon auditorium in Parktown.

An extensive process of re-positioning  the school in line with the current changing South African, African and global context culminated in the new name, the Wits School of Governance (WSG).

Prof Thomas Mogale, the head of WSG, said the school is founded on the premise of governance described as the process of ruling and steering others and the new name reflects this.

The school, based at the Parktown campus close to the Wits Business Schoo, has had the tag-line “Africa’s leading school of governance” for some time and which points to the nexus between the school and the concept of governance.

“The name change allows the school to reflect current thinking whilst still retaining the commitment of building capable developmental public administration. Essentially the new name enables the school to shape trends and influence moves while inspiring a new generation of thinkers,” explained Mogale.

Deputy vice-chancellor: academic, Prof Andrew Crouch said: “By repositioning the WSG, as the University we’d like to demonstrate our continued commitment to leading scholarship and contributing to the global commons of knowledge, specifically in this crucial field which we have in fact leaders of various kinds”.

The Wits School of Governance was formed in 1993 and claims to be southern Africa’s largest producer of graduates in the area of governance.