END_OF_DOCUMENT_TOKEN_TO_BE_REPLACED

A group of students calling themselves Wits Fees Must Fall (FMF) have demanded that vice-chancellor Professor Adam Habib intervenes in the current situation at the University of KwaZulu-Natal (UKZN).

Earlier this week, the group of about 30 students congregated in the Soloman Mahlangu House concourse, dressed in black and holding up posters showing their solidarity with the UKZN students.

The students refused to be identified or photographed, arguing that they did not want to draw attention to themselves. “This is not about us, this is about the students at UKZN who have been subjected to violence and injustice,” said one of the students.

Despite requests for the vice-chancellor to receive their memorandum of demands, the Dean of Student Affairs, Dr Puleng Lenka-Bula, was on hand to meet the students.  The memorandum outlined five demands to the vice chancellor in accordance to the positions he holds as an Impact Champion for the United Nation’s #HeForShe campaign and as chairperson of Universities South Africa and convenor of twenty six Vice Chancellors in South Africa.

The memorandum reads: “We demand that in your capacity as an Impact Champion of #HeForShe and chairperson of Universities South Africa, offer an unconditional apology to the victim of rape crime at UKZN as her rape occurs under the ridiculous and unwarranted presence of private security personnel and police on university campuses.”

“…offer an unconditional apology to all women and victims of sexual harassment at the hands of private security personnel and police deployed on university campuses…and offer direct support to the victim of a rape crime that occurred on the UKZN campus,” it further reads.

“Your unconditional support should ensure that a charge of rape has been laid against her perpetrator and that she is mentally and physically supported throughout the entire ordeal of seeing the case to trail,” it says.

Wits FMF also demand Habib institute a process where norms and standards that address gendered violence be adopted across universities and to end the “unwarranted securitisation and militarisation” of campuses across the country.

The students have given Habib five working days to respond to their demands.

The community of students have given the vice chancellor five working days to respond to their memorandum and have also requested that he give daily feedback on his progress in meeting their requirements.

Dr Lenka-Bula denied at interview with Wits Vuvuzela after accepting the memorandum.

Habib is yet to make a public statement regarding the memorandum.

No Education? “On whose Land?”

The Wits Fees Must Fall movement held a Free Education Live fundraising concert last Saturday, featuring artists like The Brother Moves On, Zethina Moses, Children of The Wind and The Muffinz.

A layer of cigarette smoke lay above the heads of the young radicals, hippies and conscious cool kids of Braamfontein last Saturday at the Free Education Live fundraising concert organised by the Wits University chapter of the Fees Must Fall (FMF) movement.

The Free Education Live fundraising concert is a concept meant to take the struggle for free, decolonised education to the wider public, said one of the organisers and member of Wits FMF, Lebohang Shikwambane. “Also, when we speak about free education we are not solely speaking about finance, or money, or having financial access to education. We are talking about a decolonised education. We are talking about tearing down those walls of colonial knowledge and colonial episteme.”

As part of the programme for the day students of the movement led a discussion into the #Asinamali campaign, the progression of the movement from inception to now and the individual experiences of the students as they navigated and struggled their way through movement and university politics. 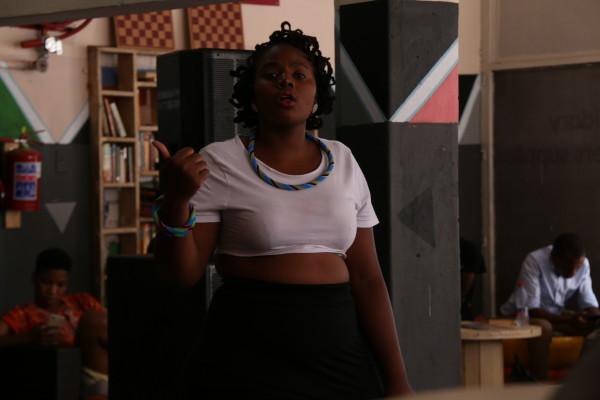 One of the most interesting parts of the discussion session was the clarification of the journey of the movement undertaken by one of the members, Sarah Mokwebo.

Mokwebo started from the very beginning, sharing narratives that are rarely heard in mainstream media. She spoke of how the movement initially began, at Wits, as the ‘October 6’ movement which was fighting for the rights of workers in the university space. The following week ‘October 6’ then began a collision with the Wits SRC to shut down the university, under the rallying call of #FeesMustFall and #EndOutsourcing.

She then moved the narrative to the hyper-masculine posture the movement then assumed after former SRC president Mcebo Dlamini and Wits Economic Freedom Fighters chair Vuyani Pambo emerged (or pushed forward – whichever way you choose to look at it) as the main leaders of the movement. The result of two males as the face of movement led the women of the movement to create the #MbokodoLead hashtag and march. The point of this was to push forward female leaders, namely former SRC president Shaerra Kalla and current SRC president Nompendulo Mkatshwa, who are as equally capable as the males leaders and to avoid the erasure of women in the movement.

The unequal power relations that resulted from having leaders aligned to the ruling party, the occupation of the union buildings and the interdicts issued against some of the members of the movement were also discussed in detail.

After the discussions, the performances began interspersed with the loud singing of freedom songs from the crowd.

The artists, The Brother Moves On, Zethina Moses, Children of the Wind and The Muffinz amongst others, performed because, as Shikwambane said, they were “people who also believe in the idea, right? Who believe in a decolonised education.” 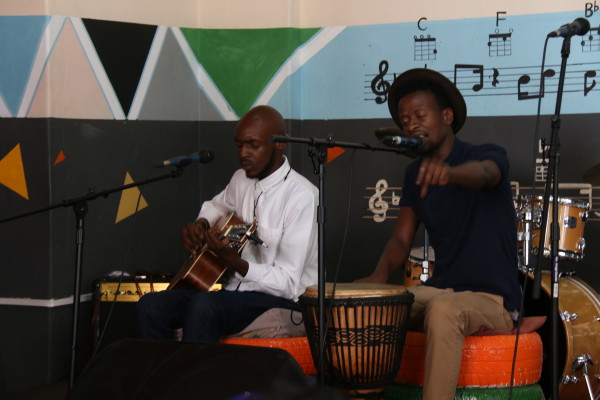 The Brother Moves On were as electrifying as usual, The Children Of The Wind moved people with their effortless soulfulness, and as the sun was setting and the heat finally subsiding, The Muffinz lit a different kind fire on stage.

Providing reasons for why they felt it particularly important as artists to perform at the concert, Itai Hakim, guitarist and vocalist for The Children Of The Wind said, “as an artist you know, art needs to speak to the condition of the times… If we [as artists] don’t get together and mobilise the people then what are you doing? what is your art doing? What’s the point? Are you just here just to be popular and just become famous or is there an actual message and a point behind your work and is that point relevant to what is happening in front of you.”

Sifiso “Atomza” Buthelezi, one of the vocalists and guitarists in The Muffinz, said “the fees must fall, there is no negotiations. No zero percent for this year, the fees must fall forever,” to roaring approvals of ‘yes!’ and ‘amandla!’ from the now inebriated crowd. “By prohibiting access to equal education you’re further building this concept of the ghetto … We know we’ve got the brains, but then they say you can’t afford to be here, what does that mean? You can’t afford to be here? On whose land?”

What became clear from the discussions, both inside and outside, was that Fees Must Fall is a contested space. But it is also a space were individuals are allowed the freedom to speak, feel and heal. 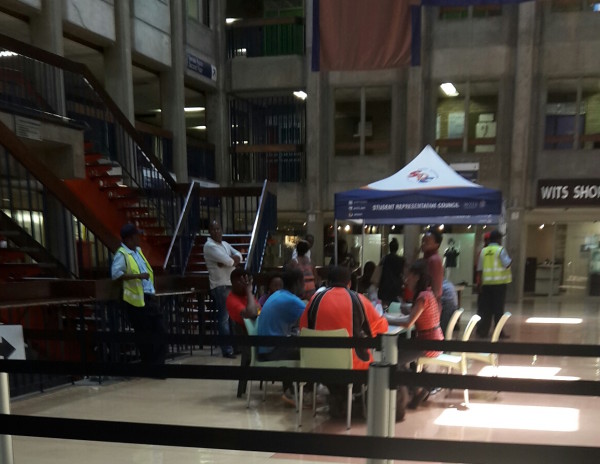