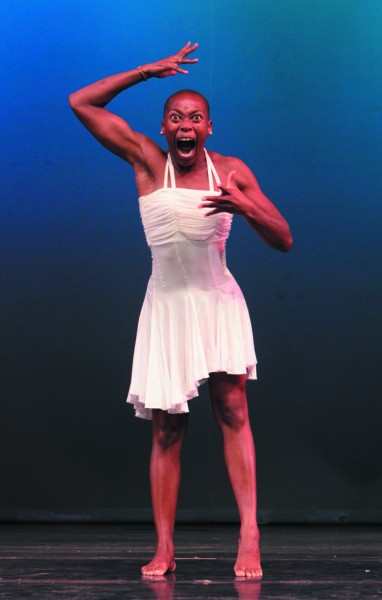 The first night of the 2011 Dance Umbrella saw PJ Sabbagha’s work, I think it’s Hamlet open at the Wits Theatre.

Winner of the Standard Bank award for dancer of the year, director Sabbagha described the work as “an essay on our personal responses and interaction with the original text through the lens of our contemporary experience as individuals and artists.”

The performance is inspired by, rather than based on, one of Shakespeare’s most famous tragedies. It is not a retelling of Shakespeare’s narrative but draws instead on Hamlet’s key themes and symbols, these being death, madness and revenge.

Performed by dancers from The Forgotten Angle Theatre Collaborative, the show literally started with a bang, with the firing of a starting gun signalling the beginning of the show.

I did often find myself wondering how dancers avoided crashing into each other, as they moved around the stage in a combination of lifts and tumbles showing their agility and stamina. They moved in a kind of unorganised precision with the fluidity that is certainly the result of hours of practice.

I recently watched Michael Flatley’s ‘Riverdance’ and was amazed by how the dancers all moved in precise unison. Sabbangha’s dancers very rarely performed identical steps and yet they moved with the same kind of synchronicity as their Irish dancing counterparts. Their movements were intricate and thoughtfully choreographed.

While admitting to being no expert on dance, there are often aspects of contemporary performances that require the kind of interpretation that eludes me. At one point two dancers came onto the stage and started chewing pieces of paper. The one then spat the chewed up pieces of paper in the other one’s face.  Why?

Later, in a complete change of lighting and mood, three male performers came out dressed in cabaret outfits and began interacting with the audience, prompted by one of their fellow cast members on a megaphone.