LIBYAN exile and Jungian psychologist, Dr David Gerbi, gave a rare, firsthand account of life under the rule of Libyan dictator Muammar Gaddafi and his menacing use of fear, intimidation, corruption and isolation on the people of Libya.

Gerbi said he returned to Libya in 2007 on a peace mission but wastaken to Tripoli by the government, where he endured psychological torture.

“If I hadn’t given them the right answers, I probably would not be here today,” he said. Gerbi believes Gaddafi is psychologically ill and that his “illness is an omnipotent grandiose”, meaning the Libyan ruler believe

s he has God-like powers and possesses an unrealistic sense of superiority. 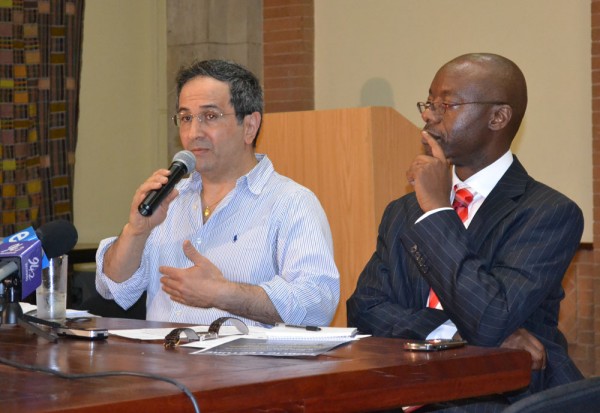 Libyan Crisis: Dr Gerbi , a Libyan Jewish exile, talks about the plight of refugees and those opposed to Gaddafi’s rule at the Humanities Graduate centre at Wits. Dean of Humanities, Professor Tawana Kupe moderated the debate. Photo: Yanga Soji

Post-apartheid South Africa is a model that he hoped Libya would follow once liberated from Gaddafi, Gerbi mentioned. His stance on South Africa’s response to the Libyan crisis was one of the talking points of his lecture.

“Gaddafi is not Mandela, he does not think about future generations, but only for himself”, said Gerbi.

He expressed his disappointment with the international community and its sluggish response to Libya’s crisis, asking: “How many litres of blood do they need to see to realise the human rights crimes?” He accused the world powers of being driven by self interest, much like Gaddafi.

“The UN sprints like a cheetah to help Europe but drags like a tortoise to help Africa.”

It is the friendship with former president Nelson Mandela that Gerbi says is challenging the Zuma administration from being more vocal about the Libyan situation, but ordinary South Africans could do their bit and support the people of Libya by rallying on social networks and forcing our leadership to be more active about Libya.