Marching to the queue marshal’s orders 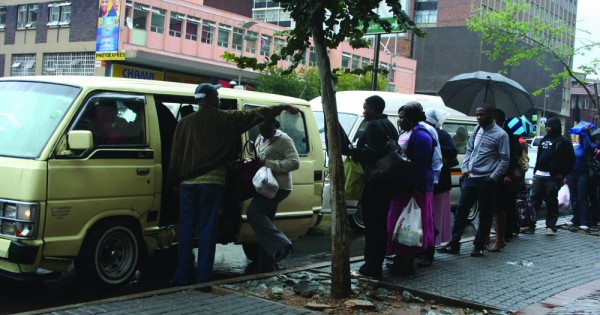 BRAAMFONTEIN commuters catching taxis on the corner of Jorissen Street and Jan Smuts Avenue are complaining that they are forced to wait in line to board the taxis.

Commuters are made to stand in queues by two men who will not allow them to get into a taxi without their permission, resulting in many of them arriving home late. Some allege they are being harassed by the queue marshals mainly when they have ‘jumped into’ a taxi without the marshals’ approval.

Lindiwe Nkutha, who works in Braamfontein and has taken taxis from the intersection for years, said: “What can we say? We are always arguing with these queue marshals because now we have to wait and get home around 7pm.

“They are rude and sometimes say, ‘Suka la wena sdudla!’(Get away from here fatty) and want to tell us where to sit in the taxi, but it’s my money that has to pay for the taxi ride.”

When approached, one of the queue marshals claimed they started this “system” last February and the reason was to control and ease the flow of traffic at the intersection.

According to the Johannesburg secretary of the South African Taxi Association, Mr Buthelezi, “The queue marshals have been hired by the relevant association – Faraday Taxi Association – to monitor and ensure that taxis from the different branches do not collect passengers at locations they are not permitted,  because those are issues that cause conflict in the taxi industry.”

Asked if commuters had been informed of the appointing of queue marshals, he said if any commuters had complaints they should lodge them with the Faraday Taxi Association.

Taxi drivers at the intersection did not seem to have a problem picking up passengers because they sometimes pick up commuters who are not waiting in line, as before. Many of them were reluctant to comment when approached.

It seems the queue marshals and their marching orders are here to stay.